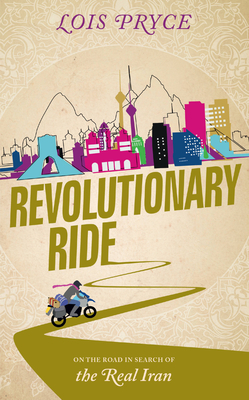 On the Road in Search of the Real Iran

"A proper travelogue - a joyful, moving and stereotype-busting ride." - National Geographic Traveller, Book of the YearIn 2011, at the height of tension between the British and Iranian governments, travel writer Lois Pryce found a note left on her motorcycle outside the Iranian Embassy in London:

... I wish that you will visit Iran so you will see for yourself about my country. WE ARE NOT TERRORISTS!!! Please come to my city, Shiraz. It is very famous as the friendliest city in Iran, it is the city of poetry and gardens and wine!!!
Your Persian friend,
Habib

Intrigued, Lois decides to ignore the official warnings against travel (and the warnings of her friends and family) and sets off alone on a 3,000 mile ride from Tabriz to Shiraz, to try to uncover the heart of this most complex and incongruous country. Along the way, she meets carpet sellers and drug addicts, war veterans and housewives, doctors and teachers - people living ordinary lives under the rule of an extraordinarily strict Islamic government.

Revolutionary Ride is the story of a people and a country. Religious and hedonistic, practical and poetic, modern and rooted in tradition - and with a wild sense of humour and appreciation of beauty despite the comparative lack of freedom - this is the true story of real contemporary Iran.

Praise For Revolutionary Ride: On the Road in Search of the Real Iran…

Breezy and upbeat... it's enough to make readers reach for their helmets and aim for a remote part of the globe.—New York Times

A gutsy tale of one woman and her bike, told with vigour and honesty.—The Irish Times

If you still need to know why the motorcycle is a magical device for revealing the truth about this wonderful, endangered world, read Lois Pryce's sometimes frightening, sometimes hilarious, always warm-hearted testament. That will do it for you. Thank you Lois, so much.—Ted Simon, author of 'Jupiter's Travels'

Within a few pages I'd recognised a kindred spirit. Tourist-free solo travelling, lo-fi equipment including real maps instead of gadgets, a satisfying blend of action, thought and feeling, well-timed references to or quotes from one of my own heroines since I was a teenager. That central theme - the distinction between government and people - is not easy to maintain but it seemed to me Lois hit the right note every time.—Dervla Murphy, author of 'Full Tilt'

Lois Pryce's motorbike takes her into corners of modern Iranian life that are full of the unexpected.—James Buchan, author of 'Days of God: The Revolution in Iran and Its Consequences'

Long before the relaunch of BA's Tehran flights signalled a thumbsup to travel, Lois Pryce was gadding about the country on a motorbike.—Sunday Times

Pryce writes as she acts, with an easy ebullience, and this makes interesting things happen to her. Revolutionary Ride is likeable because she admits her ignorance and follows her nose.—Daily Telegraph

The story of an epic journey that takes the myths and unravels them first hand.—Motorcycle Sport & Leisure

This is a proper travelogue - a joyful, moving and stereotype-busting tale.—National Geographic Traveller

Lois Pryce writes with all the exuberance and verve with which she dons her helmet and takes to the road.—Benedict Allen

Lois Pryce is a journalist and speaker and has written for the Telegraph, the Independent, the New York Times, CNN and the Guardian and is a contributing editor for Overland Journal. She was named by the Telegraph as one of the 10 Great Female Travellers and is the author of two other bestselling books about her adventures by motorcycle. ww.loisontheloose.com @LoisPryce
Loading...
or
Not Currently Available for Direct Purchase