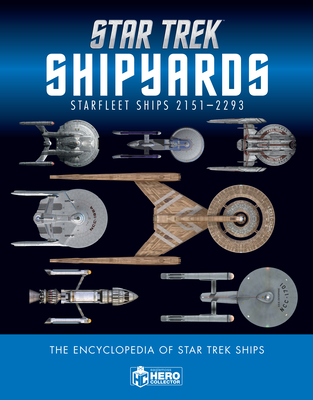 For the first time ever, a chronological history of the Starfleet starships from Star Trek television shows and films!

Profiles more than 250 years worth of Starfleet ships! Including Zefram Cochrane's ship The Phoenix, which made the first faster-than-light journey in human history, through Captain Kirk's famous Enterprise up to the Enterprise-B: the ship where Kirk was lost. Plus all of the Starfleet ships from the STAR TREK: DISCOVERY TV series!

This in-depth reference book includes a technical overview and operational history for each ship and is illustrated with CG artwork, including original VFX models made for the TV show.

STAR TREK SHIPYARDS is a series of lavishly illustrated books that provide in-universe profiles of STAR TREK ships. Each ship is profiled with technical information, its operational history and much more.

“No ship is too abstract for Ben Robinson and his Eaglemoss team, who do an excellent job of breaking down each ship design with creative notes and interviews with the designers throughout. Each article reveals something you didn’t know about the creative process in one ship after another.” - Trek Core

This in-depth reference book, written by Ben Robinson, Marcus Riley, and Matt McAllister profiles Starfleet ships from the birth of the Federation to the launch of the U.S.S. Enterprise NCC-1701-B and the death of Captain Kirk. It also includes a chapter on Earth’s pre-Federation vessels, including Zefram Cochrane’s ship the Phoenix, which made mankind’s first faster-than- light journey. Plus all of the Starfleet ships from the first season of STAR TREK: DISCOVERY and the original STAR TREK TV series. The book is richly illustrated with CG artwork using the original VFX models created for the STAR TREK TV shows and movies.

STAR TREK SHIPYARDS is a series of lavishly illustrated books that provide in-universe profiles of STAR TREK ships, building into the ultimate illustrated encyclopedia of STAR TREK vessels. Each ship is profiled with technical information, operational history and plan view CG renders – wherever possible using the original VFX models that were used on the TV shows and movies.

Ben Robinson is best known as the man behind Eaglemoss's Official Star Trek Starships collection, which in the last three years has become the largest and best-regarded collections of model Star Trek ships ever produced.

He has been involved with Star Trek for 20 years. Ben was the launch editor of the hugely succesful Star Trek Fact Files reference work, which sold over 50 million units. Then he went on to edit the US Star Trek: The Magazine, which ran between 1999 and 2003. He has co-written two Haynes Manuals, the first featuring all seven Enterprises, and the second focusing on the Klingon Bird-of-Prey. Ben is particularly passionate about the writing, design, and visual effects behind the series. In the last two decades he has conducted extensive interviews with many of the most significant figures in the history of Star Trek from Dorothy Fontana and Matt Jefferies to Michael Piller, Ira Steven Behr, Ron D. Moore, and Bryan Fuller.
Loading...
or
Not Currently Available for Direct Purchase