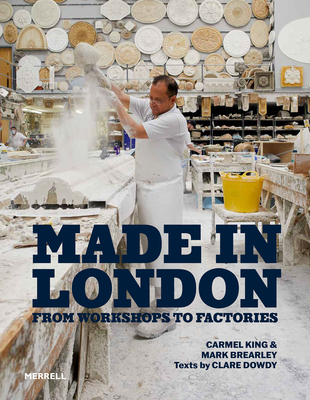 From Workshops to Factories

A fascinating look behind the doors of the
workshops and factories of London that make everything from glass eyeballs to
automobiles. Walking through London's busy streets, you would not
imagine that the city boasts one of the world's most diverse manufacturing
scenes. But throughout its 32 boroughs, people are making propellers, bicycles,
ballet shoes, military uniforms, cardboard packaging, neon signs, umbrellas, chocolate
truffles, craft beer and much more. Today there are around 4000 manufacturers
based in Greater London, building on the city's rich heritage of making.
While producing world-class goods, they are all jostling for space and
dealing with familiar challenges, such as rising rents and trying to keep
developers at bay.

This book provides a fascinating glimpse behind the
doors of London's making and manufacturing companies: the processes and
spaces that are so often hidden from view, and the people who work there,
from sole traders to workforces numbering in the hundreds. The introduction
is written by Mark Brearley, an architect and Professor of Urbanism at London
Metropolitan Museum who also owns the London-based tray and trolley
manufacturer Kaymet. The main part of the book is arranged into chapters
grouping similar types of manufacturer. In total, 50 businesses are featured,
ranging from the Ford Motor Company in Dagenham, the biggest factory in
London; to William Say, third-generation tin-can makers, in Bermondsey;
Nichols Brothers, bespoke woodturners, in Walthamstow; Growing Underground, a
salad farm in old air-raid shelters under the streets of Clapham; and Jost
Haas, Britain's last glass-eye maker, in Mill Hill. Specially commissioned
photography by Carmel King captures the making process, the materials, the finished
products and the staff at each manufacturer, while concise, engaging descriptions
are provided by the design and architecture journalist Clare Dowdy. Made
in London is a timely celebration of the vibrant manufacturing scene that
contributes so much to the creativity, vitality and economy of the city.

CarmelKing isa photographer who has spent the last decade documenting craftspeople, heritagebrands and independent businesses across the British Isles. MarkBrearley is an architect and Professor of Urbanism atLondon Metropolitan University. Formerly head of Design for London, he is alsoproprietor of the long-established London tray and trolley manufacturer Kaymet. Clare Dowdy is a freelance journalist, editor and copywriter. She has writtenarticles for the Financial Times, Monocle, Wallpaper andBBC.com, and previously edited the online magazine Furnace.
Loading...
or support indie stores by buying on