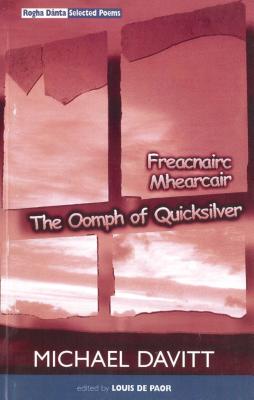 The Oomph of Quicksilver

A dual language collection of poetry by one of the most vibrant and innovative Irish language poets.

Michael Davitt is a very well known Irish writer and broadcaster. He founded the poetry broadsheet and journal Innti, and was a central figure in a new movement in Gaelic poetry in the 1970's. He became a friend of Sean O Riordain, to who's metaphysical wit he gave a sharp vernacular edge. Davitt was also influenced by the linguistic virtuosity of the American e.e. cummings, the Beat poets and American popular culture. His poems have a wide-awake conscience that holds a mirror to contemporary Irish society, while his poems about and for people he admires capture their force and vitality.

This is the first time Davitt's poems have appeared together in a single volume, and the translations were carefully worked by a number of leading Irish poets including Brendan Kennelly, Paul Muldoon, and John Montague.

Students of Irish poetry and poetry lovers alike will enjoy this selection.