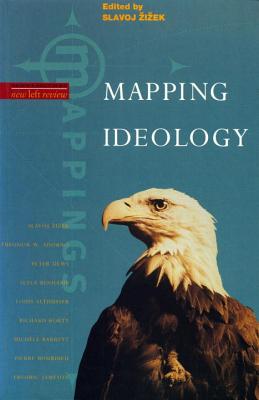 Mapping Ideology is one of the first titles in the new series Mappings, carefully assembled readers designed to offer students, teachers and general readers essential surveys of new zones of cultural, social and political experience.

Slavoj Žižek is a Slovenian philosopher and cultural critic. He is a professor at the European Graduate School, International Director of the Birkbeck Institute for the Humanities, Birkbeck College, University of London, and a senior researcher at the Institute of Sociology, University of Ljubljana, Slovenia. His books include "Living in the End Times," "First as Tragedy, Then as Farce," "In Defense of Lost Causes," four volumes of the Essential Žižek, and many more.

Theodor Adorno was director of the Institute for Social Research at the University of Frankfurt from 1956 until his death in 1969. His works include "In Search of Wagner"; "Aesthetic Theory"; "Negative Dialectics"; and (with Max Horkheimer) "Dialectic of Enlightenment" and "Towards a New Manifesto."

Louis Althusser was born in Algeria in 1918 and died in France in 1990. He taught philosophy for many years at the Ecole Normale Superieur in Paris, and was a leading intellectual in the French Communist Party. His books include "For Marx"; "Reading Capital" (with Etienne Balibar); "Essays in Ideology"; "Politics and History: Montesquieu, Rousseau, Marx"; "Machiavelli and Us"; and "The Spectre of Hegel."

Michele Barrett is Professor of Modern Literary and Cultural Theory in the School of English and Drama, Queen Mary, University of London. She is the author, among other works, of "Women's Oppression Today," "The Anti-Social Family," and "Politics of Diversity" (co-authored with Roberta Hamilton).

Pierre Bourdieu (1930-2002) was Professor of Sociology at the College de France and Director of Studies at the Ecole des Hautes Etudes en Sciences Sociales. He was the author of many books, most notably "Distinction," "The Rules of Art," "The State Nobility," "Homo Academicus," "The Logic of Practice," and "The Weight of the World."

Peter Dews is Professor of Philosophy at the University of Essex. He has published widely on contemporary French and German thought, and is the author of "The Limits of Disenchantment."

Terry Eagleton is Professor of Cultural Theory and John Rylands Fellow, University of Manchester. His other books include "Ideology"; "The Function of Criticism"; "Heathcliff and the Great Hunger"; "Against the Grain"; "Walter Benjamin"; and "Criticism and Ideology," all from Verso.

The psychoanalyst Jacques Lacan (1901-1981) was one of the twentieth century's most influential thinkers. His many published works include "Ecrits" and "The Seminars."

Goran Therborn holds the Chair of Sociology at the University of Cambridge, and is editor and author of "Inequalities of the World," "Asia and Europe in Globalization," "Between Sex and Power" and "From Marxism to Post Marxism?"

Bryan S. Turner is professor of Sociology in the Department of Sociology at Cambridge University in England and a professorial fellow of Fitzwilliam College, Cambridge. His previous publications include "The Body and Society" (1984), "Medical Power and Social Knowledge" (1987) and "Regulating Bodies" (1992). He is the joint editor with Mike Featherstone of the journal "Body & Society." He teaches medical sociology and the sociology of human rights at Cambridge. He is currently editing the "Cambridge Dictionary of Sociology" (with Craig Calhoun and Chris Rojek) and the "International Handbook of Sociology." He is also doing research on rights, learning disabilities, and social inclusion.
Loading...
or support indie stores by buying on