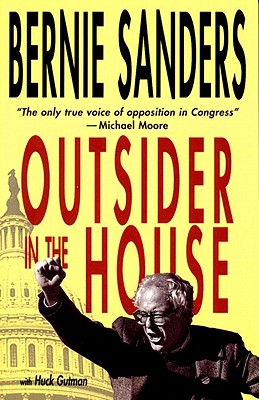 Outsider in the House

For the past 30 years, Bernie Sanders has been making American political history and becoming a hero to the progressive left. Long before his groundbreaking election to the US Senate, Sanders dreamt of bringing radical social change to America. This vision was a driving force behind his eight years serving as mayor of Burlington, as well as his 1991 election as the first independent candidate in the House of Representatives.

In Outsider in the House, Sanders tells the story of his remarkable career as a progressive socialist and outspoken dissident, using his experience to expose the bias and injustice within one of the worlds most powerful political systems. From his fight for a livable minimum wage, to campaigning on behalf of fair electoral politics, Sanders sheds light on his struggles with both the left and right. True to his renowned optimism, he concludes by making much-needed suggestions for tackling contemporary issues, an uplifting take on the potential for democracy to deliver political and social justice.

Praise For Outsider in the House…

“A clear, compelling and comprehensive vision for reinvigorating democracy, reducing poverty, rebuilding the middle class and restructuring our health care and education systems. Sanders gives us a vision of the day when ‘we will no longer be outsiders in the House.’”—In These Times

“Outsider in the House is a rare achievement: a concise, compelling book that both tells an interesting story and provides a readable, down-to-earth blueprint for political change.”—The Onion

“A road map for how progressives can win elections and not be a part of the two party duopoly.”—Ralph Nader

“A grass-roots ‘how-to’ guide, especially helpful and inspirational for prospective independent candidates—a firsthand description of the career of the most successful American socialist politician in modern times.”—The Hill

<a href="http://sanders.senate.gov/">Bernie Sanders</a> was elected to the U.S. Senate in 2006 after serving 16 years in the House of Representatives. He is the longest serving independent member of Congress in American history. Early in his career, Sanders was director of the American People’s Historical Society. Elected Mayor of Burlington by 10 votes in 1981, he served four terms. Before his 1990 election as Vermont’s at-large member in Congress, Sanders lectured at the John F. Kennedy School of Government at Harvard and at Hamilton College in upstate New York.

Huck Gutman, a long-time political collaborator of Sanders, is Professor of English at the University of Vermont.
Loading...
or
Not Currently Available for Direct Purchase