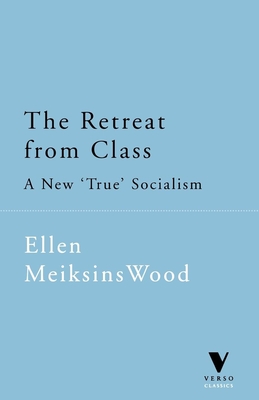 The Retreat From Class

Exploring the connections between class, ideology and politics

In this classic study, which won the Isaac Deutscher Memorial Prize, Ellen Wood provides a critical survey of influential trends in “post-Marxist” theory. Challenging their dissociation of politics from class, she elaborates her own original conception of the complex relations between class, ideology and politics. In the process, Wood explores the links between socialism and democracy and reinterprets the relationship between liberal and socialist democracy.

In a new introduction, Wood discusses the relevance of The Retreat from Class in a post-Soviet world. She traces the connections between post-Marxism and current academic trends such as postmodernism and argues that a re-examination of class politics is a necessary counter to the current cynical acceptance of capitalism.

Ellen Meiksins Wood, for many years Professor of Political Science at York University, Toronto, is the author of many books, including Democracy Against Capitalism and, with Verso, The Pristine Culture of Capitalism, The Origin of Capitalism, Peasant-Citizen and Slave, Citizens to Lords, Empire of Capital and Liberty and Property.
Loading...
or
Not Currently Available for Direct Purchase