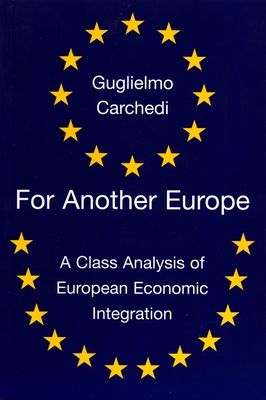 In this innovative work, Guglielmo Carchedi argues that only an analysis centered on class as the basic unit of social life, with production and distribution of value understood as the bedrock of the economy, can throw light on the internal contradictions of European economic integration.

Two specific themes emerge from this radical approach. First, familiar topics such as competition and social policy, economic and monetary union, the Common Agricultural Policy and immigration, are treated in an original manner. Second, subjects usually ignored in the standard textbooks, for instance the role of interest groups in the Union’s decision-making process, are shown to be of crucial importance in understanding the economics of the European Union. This work therefore provides both an introduction to and a critique of the European project.

The book’s central message however, is that another sort of Europe is possible, one based on the erosion of economic polarization, on the abolition of Europe’s imperialist relations with the Third World, and on the creation of truly democratic institutions of self-determination.

Guglielmo Carchedi is Senior Researcher in the Department of Economics and Econometrics at the University of Amsterdam. His previous books include Frontiers of Political Economy and Marx and Non-Equilibrium Economics.
Loading...
or
Not Currently Available for Direct Purchase