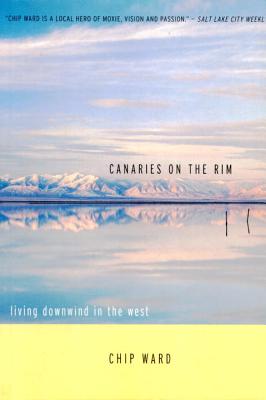 Canaries on the Rim (Paperback)

In the late 1970s Chip Ward and his wife left the Sleeping Rainbow Ranch in Capitol Reef National Park to raise their children in the classic small-town American setting of Grantsville, Utah. There, on the edge of the Great Basin Desert, disturbing tales of local sickness and death interrupted an idyllic life. A seven-year quest to understand a hidden history of ecocide followed. Canaries on the Rim is Ward’s firsthand account of that quest and how lessons learned in the wilderness were later applied to building opposition to toxic waste disposal, chemical weapons incineration, industrial pollution, and nuclear waste storage. The secret holocaust that is unfolding along the toxic shadow of America’s Great Basin Desert is grim, but Ward’s colorful and often-humorous story is not. Canaries on the Rim is a warning and a call to arms, but it is also a compelling drama and a lively primer on environmental activism. If civil action took place in Edward Abbey’s West, this is the book that would result.

Michael Sprinker was Professor of English and Comparative Literature at the State University of New York at Stony Brook. His Imaginary Relations: Aesthetics and Ideology in the History of Historical Materialism and History and Ideology in Proust are also published by Verso. Together with Mike Davis, he founded Verso’s Haymarket Series and guided it until his death in 1999.

Praise For Canaries on the Rim: Living Downwind in the West (Haymarket Series)…

“Not just a memoir but a manual for citizen activism. It may be a manifesto, but its humor and informality—in and among the hair-raising details—make it an entertaining one.”—Boston Globe

“This book is a must read. For the beauty of the nature writing, for the humor, the intelligence, and the details on a community organization becoming a national power ... The experiences of Chip Ward need a series of books detailing his successes and failures. We could all learn from him.”—Sierra Club

“This call to clipboards for local activism is both hopeful and damning: a gift to the next generation and a warning that, in the end, there is no upwind.”—Publishers Weekly
or
Not Currently Available for Direct Purchase
Copyright © 2020 American Booksellers Association