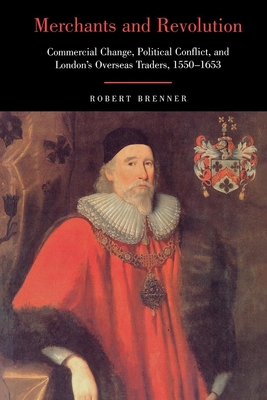 Merchants and Revolution examines the activities of London’s merchant community during the early Stuart period. Proposing a new understanding of long-term commercial change, Robert Brenner explains the factors behind the opening of long-distance commerce to the south and east, describing how the great City merchants wielded power to exploit emerging business opportunities, and he profiles the new colonial traders, who became the chief architects of the Commonwealth’s dynamic commercial policy.

Robert Brenner is Director of the Center for Social Theory and Comparative History at UCLA. He is the author of The Boom and the Bubble, Merchants and Revolution, The Economics of Global Turbulence and co-editor of Rebel Rank and File.

“Brenner has made more discoveries of importance about the period than any of his contemporaries.”—London Review of Books

“Constantly provocative, a giant of a book.”—Times Literary Supplement

“If Brenner’s work suggests new beginnings, its primary focus is on some of the most venerable debates in British historiography.”—Reviews in American History
or support indie stores by buying on
Copyright © 2020 American Booksellers Association