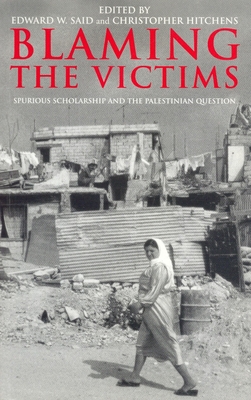 Spurious Scholarship and the Palestinian Question

Since the 1948 war which drove them from their heartland, the Palestinian people have consistently been denied the most basic democratic rights. Blaming the Victims shows how the historical fate of the Palestinians has been justified by spurious academic attempts to dismiss their claim to a home within the boundaries of historical Palestine and even to deny their very existence.

Beginning with a thorough exposé of the fraudulent assertions of Joan Peters concerning the indigenous inhabitants of Palestine prior to 1948, the book then turns to similar instances in Middle East research where the truth about the Palestinians has been systematically suppressed: from the bogus—though still widely believed—explanations of why so many Palestinians fled their homes in 1948, to today’s distorted propaganda about PLO terrorism. The volume also includes sharp critiques of the wide consensus in the USA which supports Israel and its territorial ambitions while maintaining total silence about the competing reality of the Palestinians.

Praise For Blaming the Victims: Spurious Scholarship and the Palestinian Question…

“The wide-ranging scope and demythologising structure of Blaming the Victims makes it especially relevant at the present time when the actions of the state of Israel seem to contradict received opinion as to its nature. The book provides a great quantity of information, analyses it convincingly and, through an impressive body of notes on primary and secondary literature, points the reader in the direction of further information.”—Middle East International

“These forcefully argued treatises will be as enlightening as they are disturbing for anyone with an interest in Middle East politics.”—ALA Booklist

Christopher Hitchens is a contributing editor to Vanity Fair and the author of the best-selling God Is Not Great. His books published by Verso include The Trial of Henry Kissinger, No One Left to Lie To, The Missionary Position, Unacknowledged Legislation, The Parthenon Marbles, Hostage to History, and more.

Edward W. Said (1935–2003) was University Professor of English and Comparative Literature at Columbia. A member of the American Academy of Arts and Sciences, the Royal Society of Literature and of Kings College Cambridge, his celebrated works include Orientalism, The End of the Peace Process, Power, Politics and Culture, and the memoir Out of Place. He is also the editor, with Christopher Hitchens, of Blaming the Victims, published by Verso. New Left Review published <a href="http://www.newleftreview.org/?view=2481">an obituary</a> in Nov–Dec 2003.

Noam Chomsky is Institute Professor in the Department of Linguistics and Philosophy at the Massachusetts Institute of Technology. He is the author of American Power and the New Mandarins, Manufacturing Consent (with Ed Herman), Deterring Democracy, Year 501, World Orders Old and New, Powers and Prospects, Profit over People, The New Military Humanism and Rogue States.

Norman G. Finkelstein is the author of A Nation on Trial (with Ruth Bettina Birn), named a notable book for 1998 by the New York Times Book Review, and Image and Reality of the Israel-Palestine Conflict.
Loading...
or support indie stores by buying on