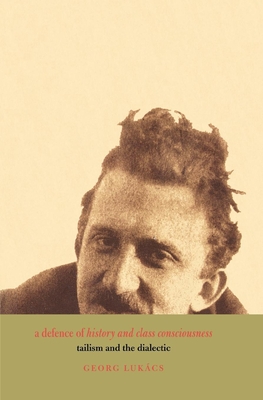 A Defence of History and Class Consciousness

Tailism and the Dialectic

In the mid 1920s Lukács wrote a sustained and passionate response to Stalin’s onslaught on his earlier seminal work History and Class Consciousness. Unpublished at the time, Lukács himself thought that the text had been destroyed. However, a group of researchers recently found the manuscript gathering dust in the newly opened archives of the CPSU in Moscow. Now for the first time, this fascinating, polemical and intense text is available in English. It is a crucial part of a hidden intellectual history and will transform interpretations of Lukács’s oeuvre.

Praise For A Defence of History and Class Consciousness: Tailism and the Dialectic…

“Lukács’s polemic tells of a dogmatic, corrupt, ultimately murderous period in the transition from Stalinism ... it tells also of the passion, so vividly Judaic and Central European, for the life and clash of ideas.”—George Steiner, Times Literary Supplement

“We almost hear Lenin himself murmuring, it happens that for eighty years no Marxist has ever properly understood History and Class Consciousness! Splendidly translated here by Esther Leslie and contextualized by an introduction by John Rees and a conclusion by Slavoj Žižek (both of them stimulating and suggestive).”—Fredric Jameson, Radical Philosophy

Georg Lukács (1885–1971) was a Hungarian Marxist philosopher and literary critic. Most scholars consider him to be the founder of the tradition of Western Marxism. He contributed the ideas of reification and class consciousness to Marxist philosophy and theory, and his literary criticism was influential in thinking about realism and about the novel as a literary genre. He served briefly as Hungary’s Minister of Culture following the 1956 Hungarian Revolution.

Esther Leslie is a lecturer in English and Humanities at Birkbeck College, London. She is the author of Walter Benjamin: Overpowering Conformism and sits on the editorial boards of Historical Materialism, Radical Philosophy and Revolutionary History.

John Rees is a writer, broadcaster and activist. His books include The Algebra of Revolution and Imperialism and Resistance. He is the writer and presenter of the Timeline TV series, a member of the editorial board of the online magazine Counterfire, and co-founder of the Stop the War Coalition.
Loading...
or
Not Currently Available for Direct Purchase