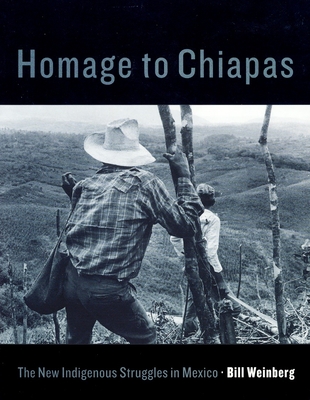 The New Indigenous Struggles in Mexico

The new Zapatistas in Chiapas have served as a catalyst for revolutionary indigenous movements across Mexico, pioneering a new model of resistance and posing a powerful threat to the stability of the North American Free Trade Agreement (NAFTA). Homage to Chiapas vividly depicts the grassroots struggles for land and local autonomy now underway in an economically strategic nation of nearly 100 million people. Weinberg analyzes NAFTA’s impact on Mexico’s campesinos with on-the-spot reportage from Tabasco, where fishermen blockade state owned oil wells to protest local pollution, from Central Mexico where plans for a giant computer complex and golf course spark an Indian uprising, as well as from Chiapas where he interviews Sub-commander Marcos. He also examines Mexico’s growing militarization in the name of the war on drugs and reviews the Zapatistas’ challenge to their supporters to carry the struggle throughout Mexico and beyond its borders.

Bill Weinberg is a correspondent, principally on Mexico and Central America, for Native Americas, the quarterly journal of Cornell University’s American Indian Studies Program. He is also an editor at High Times, the American counterculture monthly, and a producer at New York’s non-commercial WBAI Radio. An award-winning journalist specializing in the environment and native issues, he is the author of War on the Land: Politics & Ecology in Central America. He currently resides in New York.

Praise For Homage to Chiapas: The New Indigenous Struggles in Mexico…

“Bill Weinberg slogs through jungles to uncover heroic insurrectionary hopes—radical journalism the way it is supposed to be done.”—Hakim Bey

“Bill Weinberg gets into Indian Mexico deeper than any other reporter. Beyond Chiapas, he reports on the political-ecological tinderbox that is Mexico, and how the Mexican indigenous 500-year quest for justice will impact North America critically in the next decade.”—Jose Barreiro

“Provides an interesting panoramic view of recent movements that have developed throughout Mexico.”—Library Journal

“Bill Weinberg’s comprehensive yet readable page-turner brilliantly locates the Zapatista movement in its historical and social context. Based on outstanding research as well as first-hand knowledge, this excellent book is indispensable for a full understanding of the uprising, as well as movements against ‘free trade’ internationally.”—Murray Bookchin
or
Not Currently Available for Direct Purchase
Copyright © 2020 American Booksellers Association