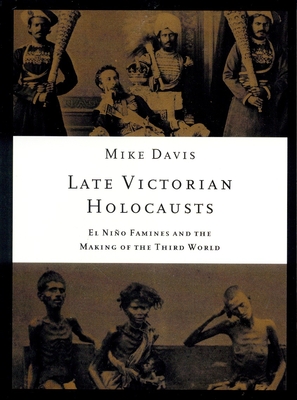 El Niño Famines and the Making of the Third World

Examining a series of El Niño-induced droughts and the famines that they spawned around the globe in the last third of the 19th century, Mike Davis discloses the intimate, baleful relationship between imperial arrogance and natural incident that combined to produce some of the worst tragedies in human history.

Late Victorian Holocausts focuses on three zones of drought and subsequent famine: India, Northern China; and Northeastern Brazil. All were affected by the same global climatic factors that caused massive crop failures, and all experienced brutal famines that decimated local populations. But the effects of drought were magnified in each case because of singularly destructive policies promulgated by different ruling elites.

Davis argues that the seeds of underdevelopment in what later became known as the Third World were sown in this era of High Imperialism, as the price for capitalist modernization was paid in the currency of millions of peasants’ lives.

Praise For Late Victorian Holocausts: El Niño Famines and the Making of the Third World…

“Davis has given us a book of substantial contemporary relevance as well as great historical interest … this highly informative book goes well beyond its immediate focus.”
—Amartya Sen, New York Times

“Davis’s range is stunning … He combines political economy, meteorology, and ecology with vivid narratives to create a book that is both a gripping read and a major conceptual achievement. Lots of us talk about writing ‘world history’ and ‘interdisciplinary history’: here is the genuine article.”
—Kenneth Pomeranz, author of The Great Divergence

“The global climate meets a globalizing political economy, the fundamentals of one clashing with the fundamentalisms of the other. Mike Davis tells the story with zest, anger, and insight.”
—Stephen J. Pyne, author of World Fire

“Davis, a brilliant maverick scholar, sets the triumph of the late-nineteenth-century Western imperialism in the context of catastrophic El Niño weather patterns at that time ... This is groundbreaking, mind-stretching stuff.”
—Independent

“Late Victorian Holocausts will redefine the way we think about the European colonial project. After reading this, I defy even the most ardent nationalist to feel proud of the so-called ‘achievements’ of empire.”
—Observer

“Generations of historians largely ignored the implications [of the great famines of the late nineteenth century] and until recently dismissed them as ‘climatic accidents’ … Late Victorian Holocausts proves them wrong.”
—Los Angeles Times (Best Books of 2001)

“A hero of the Left, Davis is part polemicist, part historian, and all Marxist.”
—Dale Peck, Village Voice

“The catalogue of cruelty Davis has unearthed is jaw-dropping … Late Victorian Holocausts is as ugly as it is compelling.”
—Sukhdev Sandhu, Guardian

“Controversial, comprehensive, and compelling, this book is megahistory at its most fascinating—a monument to times past, but hopefully not a predictor of future disasters.”
—Foreign Affairs

Mike Davis is the author of several books including City of Quartz, The Monster at Our Door, Buda’s Wagon, and Planet of Slums. He is the recipient of the MacArthur Fellowship and the Lannan Literary Award. He lives in San Diego.
Loading...
or
Not Currently Available for Direct Purchase