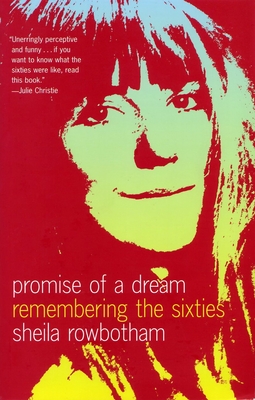 Promise of a Dream

Promise of a Dream is a moving, witty and poignant recollection of a time when young women were breaking all the rules about sex, politics and their place in the world. Sheila Rowbotham, best known for A Century of Women, Threads Through Time and Hidden From History, turns her hand here to memoir. The result is a wryly amusing account of her younger self, and a sparkling portrait of the exhilaration and enthusiasm of the sixties.

Praise For Promise of a Dream: Remembering the Sixties…

“A record of an era, winding one girl’s coming-of-age story through the drama of political evolution ... She has captured that amazing sense of possibility that grew with each year, the confidence that not only was the promised dream within reach, it was also upon us.”—Mary Maher, Irish Times

“This is a document historians dream of ... it captures the spirit of the 1960s—its fun and crazy idealism—in the life of one spirited young woman.”—Joan Bakewell, Sunday Times

“Unerringly perceptive and funny ... if you want to know what the sixties were like, read this book.”—Julie Christie

“The book works best in conveying the excitement generated by ideas, not just straightforwardly political ones but those about art and the wider definition of liberation ... I wasn’t there, but I’m happy that Rowbotham was, and that she remembers it with such clarity.”—Literary Review

“A rich, painful picture emerges of women searching for both words and spaces to articulate the insights of feminism.”—The Women's Review of Books

“The accounts of the successes, failures, joys and pains of young adulthood have the qualities to be found in the best creative writing. It is a book to be read for the quality of its writing and the honesty and humor of its presentation, as much as for the history it reveals.”—Dorothy Thompson, Times Higher Education SUpplement