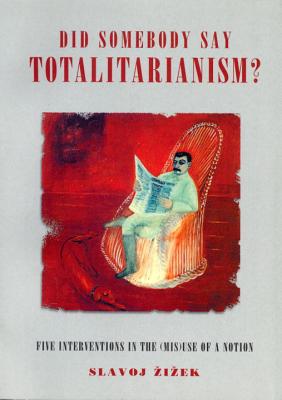 Did Somebody Say Totalitarianism? (Paperback)

Five Interventions in the (Mis)use of a Notion

Totalitarianism, as an ideological notion, has always had a precise strategic function: to guarantee the liberal-democratic hegemony by dismissing the Leftist critique of liberal democracy as the obverse, the twin, of the Rightist Fascist dictatorships. Instead of providing yet another systematic exposition of the history of this notion, Žižek’s book addresses totalitarianism in a Wittgensteinian way, as a cobweb of family resemblances. He concludes that the devil lies not so much in the detail of what constitutes totalitarianism as in what enables the very designation totalitarian: the liberal-democratic consensus itself.

Slavoj Žižek is a Slovenian philosopher and cultural critic. He is a professor at the European Graduate School, International Director of the Birkbeck Institute for the Humanities, Birkbeck College, University of London, and a senior researcher at the Institute of Sociology, University of Ljubljana, Slovenia. His books include "Living in the End Times," "First as Tragedy, Then as Farce," "In Defense of Lost Causes," four volumes of the Essential Žižek, and many more.

Praise For Did Somebody Say Totalitarianism?: Five Interventions in the (Mis)use of a Notion…

“As an alternative to the current post-modernist cult of cynicism and retreat into islands of privacy and nihilism ... the five essays making up Did Somebody Say Totalitarianism? insist on the social link and offer the visionary strength for resistance against all forms of totalized explanations.”—World Literature Today

“This attempt to rethink the conditions of radical political action is one of a number of signs that, after the doldrums of the 1980s and 1990s, left-wing thought is beginning to revive. It will be fascinating to follow where the flood of eloquence and imagination next sweeps Slavoj Žižek.”—Times Literary Supplement

“Žižek is an entertaining writer who would command attention if he were just describing how to mix cement. He wastes no time in tilting at the taken-for-granted ... Žižek wants to find the cracks in the notion of totalitarianism and fill them with dynamite.”—Times Higher Education Supplement