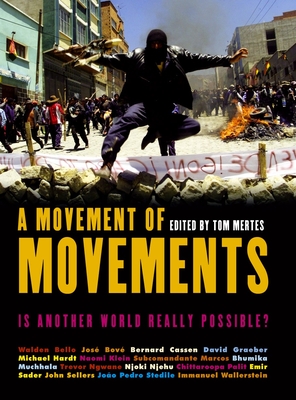 A Movement of Movements

Is Another World Really Possible?

A Movement of Movements charts the strategic thinking behind the mosaic of movements currently challenging neoliberal globalization. Leading theorists and activists—the Zapatistas’ Subcomandante Marcos, Chittaroopa Palit from the Indian Narmada Valley dam protests, Soweto anti-privatization campaigner Trevor Ngwane, Brazilian Sem Terra leader João Pedro Stedile, and many more—discuss their personal formation as radicals, the history of their movements, their analyses of globalization, and the nuts and bolts of mobilizing against a US-dominated world system.

Explaining how the Global South and the experience of indigenous peoples have provided such a dynamic and practical inspiration, the contributors describe the roles anarchism and direct democracy have played, the contributions and limitations of the World Social Forum at Porto Alegre as a coordinating focus, and the effects of and responses to the economic downturn, September 11, and Washington’s war on terror. Their statements, at once personal and visionary, offer a dazzling new insight into the political imagination of the global resistance movements.

Walden Bello is a political activist and Professor of Sociology and Public Administration at the University of the Philippines in Manila, as well as executive director of Focus on the Global South, a policy research institute based in Bangkok and for which he was the Founding Director. He was previously executive director of the Institute for Food and Development Policy (Food First) in Oakland, California and was educated at Princeton University. He has taught at the University of California, Berkeley. In 2003, Bello was awarded the Right Livelihood Award, whose website describes him as “one of the leading critics of the current model of economic globalization, combining the roles of intellectual and activist.” Bello is also a fellow of the Transnational Institute (based in Amsterdam), and is a columnist for Foreign Policy In Focus. In March 2008 he was named Outstanding Public Scholar for 2008 by the International Studies Association. Bello is the author of Deglobalization: Ideas for a New Global Economy, Dark Victory: The United States and Global Poverty and Dilemmas of Domination: The Unmaking of the American Empire.

Emir Sader is Emeritus Professor of Political Science at the University of São Paolo and Director of the Latin American Social Science Research Council (CLACSO).

João Pedro Stédile is an advocate for agrarian reform in Brazil, both as a writer and as a leader of the Landless Workers’ Movement (MST), of which he was a co-founder. His numerous publications include the three-volume A Questão Agraria no Brasil.

Immanuel Wallerstein is director of the Fernand Braudel Center at the State University of New York. His books include a three-volume study, The Modern World-System, Historical Capitalism, and, cowritten with Etienne Balibar, Race, Nation, Class.
Loading...
or support indie stores by buying on
(This book is on backorder)