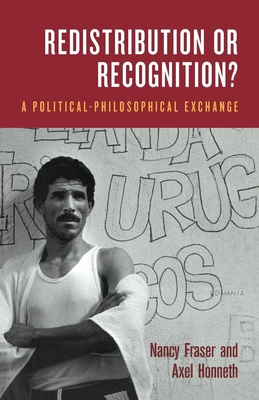 &ldquo;Recognition&rdquo; has become a veritable keyword of our time, but its relation to &ldquo;redistribution&rdquo; remains undertheorized. This volume remedies the lacuna by staging a sustained debate between two philosophers, one North American, the other European, who hold different views of the matter. Highly attuned to contemporary politics, the exchange between Nancy Fraser and Axel Honneth constitutes a rigorous dialogue on moral philosophy, social theory, and the best way to conceptualize capitalist society.

Praise For Redistribution or Recognition?: A Political-Philosophical Exchange…

“A carefully wrought and provocative debate between philosophers with strong commitments to asking what a more just social life might be. This text will doubtless produce a spate of new and important scholarship in critical theory in its wake.”
—Judith Butler

“In this exciting dialogue, Nancy Fraser and Axel Honneth do not simply explore with perfect conceptual rigor the analogies and tensions of the paradigms of ‘equal distributrion’ and ‘struggle for recognition.’ They also demonstrate why engaged theory matters for collective practice. Their speculative effort will set the agenda for transnational debates of vital importance.”
—Etienne Balibar

“In this fascinating volume, two of the major theorists of our time battle it out over the question of redistribution versus recognition. The stakes are high: how might a critical theory of capitalist society be revivified in a manner that unites philosophy, politics, and social theory. This is engaged theoretical debate of the highest level.”
—Simon Critchley

Nancy Fraser is Loeb Professor of Philosophy and Politics at the New School for Social Research, Einstein Fellow of the city of Berlin, and holder of the &ldquo;Global Justice&rdquo; Chair at the Collège d&rsquo;études mondiales in Paris. Her books include Redistribution or Recognition; Adding Insult to Injury; Scales of Justice; Justice Interruptus; and Unruly Practices.
Loading...
or
Not Currently Available for Direct Purchase