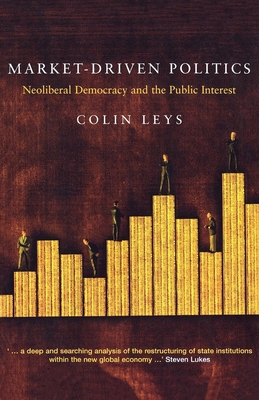 Neoliberal Democracy and the Public Interest

With the globalisation of the capitalist economy the economic role of national governments is now largely confined to controlling inflation and facilitating home-grown market performance. This represents a fundamental shift in the relationship between politics and economics; it has been particularly marked in Britain, but is relevant to many other contexts.

Market-Driven Politics is a multi-level study, moving between an analysis of global economic forces through national politics to the changes occurring week by week in two fields of public life that are both fundamentally important and familiar to everyone…television broadcasting and health care. Public services like these play an important role, because they both affect the legitimacy of the government and are targets for global capital. This book provides an original analysis of the key processes of commodification of public services, the conversion of public-service workforces into employees motivated to generate profit, and the role of the state in absorbing risk. Understanding the dynamics of each of these trends becomes critical not just for the analysis of market-driven politics but also for the longer-term defence of democracy and the collective values on which it depends.

Praise For Market-Driven Politics: Neoliberal Democracy and the Public Interest…

“... a book of enormous importance. Elegantly written, clearly structured, and powerfully argued, Market-Driven Politics documents the dangers inherent in the increasing commodification of public services and the growing subordination of national policy to global market forces. Colin Leys has written, at one and the same time, a powerful introduction to the forces shaping modern UK politics and a much needed wake-up call to the British Left.”—David Coates

“... a powerful indictment of the invasion of the public sphere by the market. Closely argued and backed by detailed case studies of health and the media this book is the most searching examination yet published of trends that are becoming ever more dominant in our politics, forcing us to reflect anew on the meaning of the public interest and how markets can be reconciled with it.”—Andrew Gamble

“In this fine and powerful book, Colin Leys gives an incisive and compelling account of the ways in which the pressures of the global market-place are undermining the public domain, and narrowing the scope of democratic politics in the process. His analysis of the disastrous effects of market-driven politics on public-service broadcasting and health care is penetrating, scholarly and unanswerable. This is a book which no one interested in the political economy of twenty-first-century Britain can afford to miss.”—David Marquand

“Neoliberal democracy is arguably the most important political notion of our age, yet it is one that is very poorly understood. Colin Leys has come to our rescue with a brilliant and accessible presentation of the concept, chock full of hard empirical data and case studies. I strongly urge all who are concerned with the future of democracy to read this book.”—Robert McChesney

Colin Leys is Emeritus Professor of Political Studies at Queen’s University, Canada. His previous books include Politics in Britain, The Rise and Fall of Development Theory and, with Leo Panitch, The End of Parliamentary Socialism.
or support indie stores by buying on