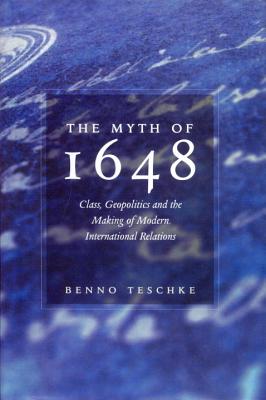 Class, Geopolitics, and the Making of Modern International Relations

Inspired by the groundbreaking historical work of Robert Brenner, Teschke argues that social property relations provide the key to unlocking the changing meaning of ‘international’ across the medieval, early modern, and modern periods. He traces how the long-term interaction of class conflict, economic development, and international rivalry effected the formation of the modern system of states. Yet instead of identifying a breakthrough to interstate modernity in the so-called ‘long sixteenth century’ or in the period of intensified geopolitical competition during the seventeenth century, Teschke shows that geopolitics remained governed by dynastic and absolutist political communities, rooted in feudal property regimes.

The Myth of 1648 argues that the onset of specifically modern international relations only began with the conjunction of the rise of capitalism and modern state-formation in England. Thereafter, the English model caused the restructuring of the old regimes of the Continent. This was a long-term process of socially uneven development, not completed until World War I.

Praise For The Myth of 1648: Class, Geopolitics, and the Making of Modern International Relations…

“A seminal book which sets out to revolutionise the way we think about international relations ... an extraordinarily ambitious project carried through brilliantly to a triumphant success ... The book is destined to produce a new research programme in international theory.”—Peter Gowan

“A truly first-rate piece of work ... he completely demolishes a reigning consensus.”—Robert Brenner