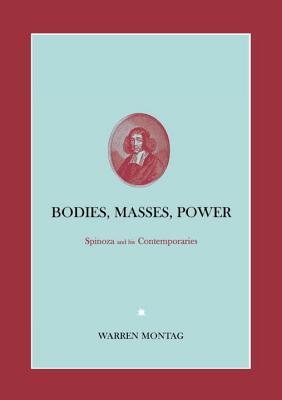 Spinoza and His Contemporaries

An analysis of the roles that history and ideology play in the production of texts.

Praise For Bodies, Masses, Power: Spinoza and His Contemporaries…

“The materiality of scripture, the objectivity of the regime of the mind, the naturality of the political body: such are the three themes that Warren Montag has chosen in order to open a direct path to Spinoza’s thought. I admire the clarity and intelligence with which he has been able to extract from this thought that which, even today, can speak to a readership beyond the historians of philosophy enclosed in the narrow limits of their speciality.”—Pierre Macherey

“In this beautiful book Montag suggests the possibility that Spinoza’s political ontology is capable not only of giving form to democratic power, but of giving creativity to the body of the multitude.”—Antonio Negri

Warren Montag is Associate Professor of English at Occidental College, Los Angeles. He is the author of "Bodies, Masses, Power: Spinoza and his Contemporaries" and the "Unthinkable Swift."
Loading...
or
Not Currently Available for Direct Purchase