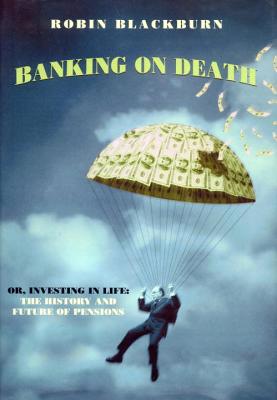 Or, Investing in Life: The History and Future of Pensions

Banking on Death offers a panoramic view of the history and future of pension provision. A work of unique scope, it traces the origins and development of the pension idea, from the days of the French Revolution to the troubles of the modern welfare state.

As we live longer, employers are closing their pension schemes and many claim that public treasuries will not be able to cope with the retirement of the babyboomers. Banking on Death analyzes the challenge facing public schemes and the malfunctioning of private retirement provision, concluding with a bold proposal for how to pay for decent pensions for all.

Robin Blackburn argues that pension funds have been depleted by wasteful promotion and used as gambling chips by ruthless and overpaid top executives. This is the world of ‘gray capitalism,’ where employees’ savings are sequestrated from them and pressed into the service of corporate aggrandizement. Even the best companies find it hard to run a business and a pension fund at the same time—especially when the latter is larger than the former. The fund managers’ notorious short-termism and herd instinct, and their failure to curb the greed and irresponsibility of the corporate elite, lead to obscene inequalities and a blighted social landscape.

The pension privatization lobby, Blackburn shows, has lost major battles in France and Germany, the United States and Italy, because of the popular fears it evokes. And the case for privatization looks intellectually threadbare after withering critiques from such notable theorists as Joseph Stiglitz and Pierre Bourdieu. Banking on Death shows that pensions are political dynamite, and have undone governments from France and Italy to Argentina. Popular outcries led Reagan, Clinton, and Blair to change tack: will this happen to George W. Bush too? Blackburn argues that the aging society will generate increased costs but, so long as the new life course is properly financed, all age groups will gain. He proposes a public regime of asset-based welfare, drawing on the ideas of John Maynard Keynes and Rudolf Meidner, that could ensure secondary pensions for all and foster a more responsible, egalitarian and humane pattern of economic development.


Praise For Banking on Death: Or, Investing in Life: The History and Future of Pensions…

“Blackburn is particularly good at disentangling the different dynamics that make the pensions problem so intractable for mature, ageing economies.”—Sir Howard Davis, Guardian

“Blackburn does an excellent job of tracing recent developments.”—Economist

“If Karl Marx were alive today, he would be in the British Library devouring everything he could find on pension funds: the new fuel of global capitalism. Robin Blackburn has read everything, and in this urgent and brilliant book, proposes a new strategy that unites workers of the world around the democratic control of their savings.”—Mike Davis

“One of the best books I have read on pension funds.”—Independent

“... required reading for all those interested in the pensions industry. That is, all of us.”—Barry Marshall

“In stormy waters and under darkening skies, Banking on Death stands like a lighthouse, providing a beam of orientation on a solid rock of research.”—Goran Therborn

“This is an important and disturbing book. Blackburn is a master of the complexities of pension provision. He unsettles belief in a commercial fix to the challenge of social insurance.”—Richard Sennett

Robin Blackburn teaches at the New School in New York and the University of Essex in the UK. He is the author of many books, including "The Making of New World Slavery," "The Overthrow of Colonial Slavery," "Age Shock," "Banking on Death," and "The American Crucible."
Loading...
or
Not Currently Available for Direct Purchase