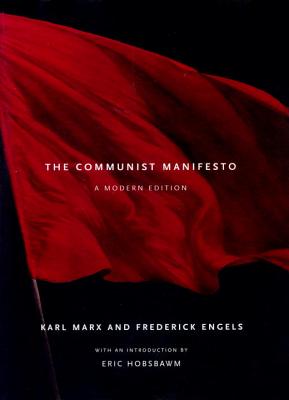 The Communist Manifesto,is the most influential political call-to-arms ever written. In the century and a half since its publication the world has been shaken repeatedly by those who sought to make its declamations a reality.

But the focus of this modern edition is not primarily the vivid history of Marx and Engels&rsquo; most important work. Rather, with a characteristically elegant and acute introduction by the distinguished historian Eric Hobsbawm, it asserts the pertinence of the Manifesto today.

Hobsbawm writes that &lsquo;the world described by Marx and Engels in 1848 in passages of dark, laconic eloquence, is recognizably the world we live in 150 years later.&rsquo; He identifies the insights which underpin the Manifesto&rsquo;s startling contemporary relevance: the recognition of capitalism as a world system capable of marshalling production on a global scale; its devastating impact on all aspects of human existence, work, the family and the distribution of wealth; and the understanding that, far from being a stable, immutable system, it is, on the contrary, susceptible to enormous convulsions and crisis, and contains the seeds of its own destruction.

For anyone skeptical of the triumphalism of the financial markets in recent years, who chooses to focus instead on the growing global divergence of rich and poor, the ravaging of the environment and the atomization of society, the Manifesto will appear as a work of extraordinary prescience and power.

Praise For The Communist Manifesto: A Modern Edition…

“As a force for change, its influence has been surpassed only by the Bible. As a piece of writing, it is a masterpiece.”
—Guardian

“[T]he best possible explanation of what the world was about that I had ever read. It pointed out that the real conflicts in the world were not between black and white, men and women, Muslims, Christians and Jews, Americans, Russians and Chinese; it was about the conflict of economic interest between 95 per cent of the population of the world, who create the world’s wealth, and the 5 per cent who own it. I think of Marx as a prophet: the last of the Old Testament prophets. And we should think of him as a teacher … Karl Marx discovered it all long before I did, and I am very grateful to him.”
—Tony Benn, The New Statesman

Karl Marx was born in 1818, in the Rhenish city of Trier, the son of a successful lawyer. He studied law and philosophy at the universities of Bonn and Berlin, completing his doctorate in 1841. In Paris three years later, Marx was introduced to the study of political economy by a former fellow student, Frederick Engels. In 1848 they collaborated in writing The Communist Manifesto. Expelled from Prussia in the same year, Marx took up residence first in Paris and then in London where, in 1867 he published his magnum opus Capital. A co-founder of the International Workingmen&rsquo;s Association in 1864, Marx died in London in 1883.

Frederick Engels was born in 1820, in the German city of Barmen. Brought up as a devout Calvinist he moved to England in 1842 to work in his father&rsquo;s Manchester textile firm. After joining the fight against the counter revolution in Germany in 1848 he returned to Manchester and the family business, finally settling there in 1850. In subsequent years he provided financial support for Marx and edited the second and third volumes of Capital. He died whilst working on the fourth volume in 1895.

A Fellow of the British Academy and the American Academy of Arts and Sciences, Eric Hobsbawm is the author of more than twenty books of history, including The Age of Revolution and The Age of Extremes. He lives in London.
Loading...
or
Not Currently Available for Direct Purchase