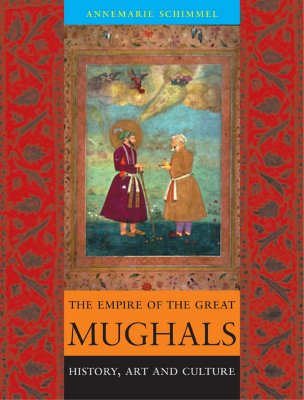 The Empire of the Great Mughals

The Mughal Empire was the most powerful Islamic empire in the history of India, and it has lived for centuries in the Western imagination as a wonderland of unimaginable treasures, symbolized most clearly by the breathtaking beauty of the Taj Mahal. This richly illustrated cultural history dispels the air of exoticism and mystery with which Westerners have often viewed the Mughals, but in doing so The Empire of the Great Mughals reveals that the cultural and artistic achievements of the Mughal Empire are no less astonishing when viewed in the cold light of historical fact.

Ranging from the founding of the empire in 1526 through its absorption into the British Empire in 1857, The Empire of the Great Mughals explores all aspects of the culture of this mighty civilization. Annemarie Schimmel paints a detailed picture of life at court, particularly for women, and the fine gradations of rank and status in the strictly hierarchical Mughal society. She details the interplay of the various religions, languages, and literatures of the era and the role played by imperial patronage in the creation of Mughal artwork, especially the creation of the Taj Mahal, built as a mausoleum for the wife of the emperor Shah Jahan. Throughout, Schimmel shows how a clear aesthetic sensibility permeated every aspect of Mughal court culture through which the Mughals attempted to bring all facets of life into harmony.

Infused with illustrations depicting the greatest works of Mughal art and architecture, The Empire of the Great Mughals is an incomparable portrait of a refined society whose achievements still inspire awe and admiration today.

Praise For The Empire of the Great Mughals: History, Art and Culture…

"Annemarie Schimmel's entire book is imbued with this sense of wonder, leading us through a rich verbal and visual survey of the Mughal Empire from the sixteenth through the nineteenth centuries."
— Clio

"This is a splendid book, fittingly enough for a history of one of the world's great empires and a worthy memorial to its distinguished author. . . . This is a wonderfully vivid portrait of a fascinating age."
— The Scotsman

"Schimmel was a respected scholar of Islam, best known for her studies of Sufism and of Persian poetry, whose love of her field was as deep as her knowledge. . . . Richly illustrated . . . Because of its extensive notes, glossary, and bibliography, this book could be used as an undergraduate text. It will be better appreciated, however, by amateur readers-lovers of culture, art, and history. Highly recommended."
— Library Journal

"A concise but extremely competent historical overview . . . a delight . . . an excellent introduction to Mughal history, art and culture, from the bazaar to the harem, and the poetic assembly to the battlefield."
— South Asia News

"An excellent cultural history of one of the great cosmopolitan court cultures, full of vivid ancedote and pertinent quotes."
— The Independent

"This masterly study of Mughal civilization offers . . . an assured overview that gives even the monoglot reader a sense of the values of Mughal poetry and prose. . . . A broad but concise introduction to Indo-Islamic culture."
— Times Higher Education Supplement

"This parting gift which Schimmel has left behind once again shows her mettle as a powerful and prolific writer of extraordinary worth. . . . It is an encyclopedic work possessing something of everything and very useful as a 'handbook of Mughal history and culture.' . . . The work is particularly significant becasue of its success at capturing the bygone grandeur of the Mughal period as well as a vivid view of medieval social life with such profundity of thought that the age comes alive for readers. The illustrations and the rich miniature paintings not only provide a visual delight but present numerous beautiful and rare images, some of which are hitherto largely unseen and unknown. . . . The book is a welcome addition to the world of scholarship--a unique dictionary of Mughal history and a culture for which Schimmel will long be remembered."
— Mansura Haidar

Annemarie Schimmel (1922–2003) was professor of Indo-Muslim culture at Harvard University and the University of Bonn. She was a consultant in the Islamic Department of the Metropolitan Museum of Art, New York, for ten years. Her books include Islam: An Introduction and My Soul is a Woman: The Feminine in Islam.
Loading...
or
Not Currently Available for Direct Purchase