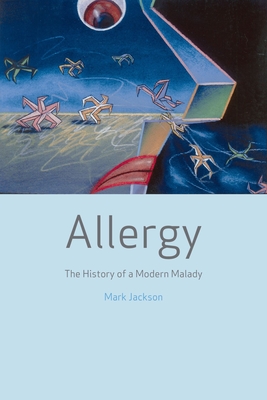 The History of a Modern Malady

Every spring, summer, and fall it descends on us, bringing rounds of sneezing, headaches, and stuffed noses. It attacks through foods, animals, plants, and innumerable chemical combinations. It is among the most common and potentially lethal afflictions known. It has a unique history as both a medical condition and a cultural phenomenon. It is the allergy, the subject of Mark Jackson’s fascinating chronicle.

Only a century ago, allergies as we know them didn’t exist. Ailments such as hay fever, asthma, and food intolerance were considered rare and non-fatal diseases that affected only the upper classes of Western society. Yet, as Jackson reveals here, what began in the early 1900s as a scorned subfield of immunology research in Europe and America exploded into great medical, cultural, and political significance by the end of that century. Allergy traces how the allergy became the archetypal “disease of civilization,” a fringe malady of the wealthy that became a disorder that bridged all socioeconomic boundaries and fueled anxieties over modernization. Jackson also examines the social impact of the allergy, as it required new therapeutic treatments and diagnostic procedures and brought in vast economic rewards.

Whether cats, crabgrass, or cheese is the source of your daily misery, Jackson’s engaging and in-depth historical narrative is an invaluable addition to the history of medicine as well as to the history of culture. In Allergy, sneezing readers can discover themselves at the center of deep cultural currents.

Praise For Allergy: The History of a Modern Malady…

"An important book because Jackson achieves a goal broadly shared, but infrequently realised, by current historians of medicine: to integrate biological and cultural events and to synchronise scientific change and social forces in a perceptive analysis. . . . a fine book."
— The Lancet

"Numerous books have been written about the history of immunology, but none to this reviewer's knowledge that focuses specifically on allergies. To boot, Jackson looks beyond medical aspects to analyze social, cultural, political, geographical, and economic implications. This is heavy reading well worth the effort, with exhaustive references that contribute to the book's scholarly value. Highly recommended."
— Tina Neville

"As you snuffle through the next pollen season, you might be consoled by reading this fascinating book."
— Adrian Barnett

"Social histories like this one provide a needed corrective to the reconstructions offered from the benefit of scientific hindsight. . . Jackson has provided a rich example of how allergy has undergone shifted meaning—scientific and social—as well as illustrating Western health care practices of the last century."
— Alfred I. Tauber

"The beauty of Jackson's study is his combination of the cultural and social with the medical, the result of which is a masterful overview of the evolution of the allergy as a public health problem. . . . His book provides a comprehensive look at allergies as a phenomenon in culture, politics, and science."
— Publishers Weekly

"He makes a convincing argument that to look on his subject in a straightforward way will not do, and it's impossible to understand allergy without placing it in the context of modern medicine. . . . Excellent account."
— Hugh Pennington

"Meticulously researched and written, and of undoubted value."
— Jeremy Laurance

"Meticulously researched. . . . Jackson's fascinating study is undoubtedly an important contribution to the social history of medicine."
— The Guardian

"The book provides a perceptive insight into the historical development of allergy, indicating how thinking changes. It gives fascinating vignettes of key researchers involved in the history of allergy and contains some interesting anecdotes about their lives. . . . Jackson’s succinct and clearly written book is aimed at the informed lay reader. He admirably avoids using jargon and scientific terminology, and gives fascinating insight into the rise in allergic diseases and how this is linked to our modern lifestyle. I recommend this book, which helps us to understand the relationship between health and the environment, and explains why modern living can be detrimental to our health."

"Jackson is at his most alert on the recent history, real and metaphorical. This is as much a book about the modern imagination as about suffering. . . . Allergy, as Jackson demonstrates, is both a medical reality and a cultural phantasm."
— Brian Dillon

"Wide ranging work. . . . Jackson illustrates his arguments with delightful reference to the culture and popular media of the day. . . . This book is a remarkable scholarly work that should serve as an exemplar of its genre."

"A splendid book. . . . Conventional historians of immunology and bedside medicine may read Allergy with blinkers and find much sound scholarship, but it deserves a wider audience."
— Christopher Lawrence

Mark Jackson is professor of the history of medicine and director of the Wellcome Centre for Cultures and Environments of Health at the University of Exeter. His books include The Age of Stress: Science and the Search for Stability.
Loading...
or
Not Currently Available for Direct Purchase