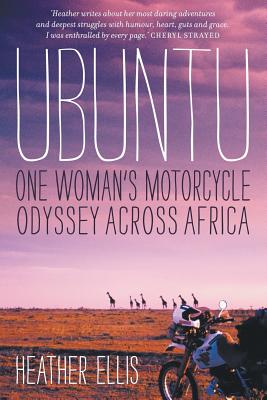 One Woman's Motorcycle Odyssey Across Africa

As you travel Africa, you will find the way of ubuntu - the universal bond that connects all of humanity as one.

At the age of twenty-eight, while sitting in a friend's backyard in the remote mining township of Jabiru, Heather Ellis has a light-bulb moment: she is going to ride a motorcycle across Africa. The idea just feels right - no matter that she's never done any long-distance motorcycle travelling before, and has never even set foot on the African continent. Twelve months later, Heather unloads her Yamaha TT600 at the docks in Durban, South Africa, and her adventure begins.

Her travels take her to the dizzying heights of Mt Kilimanjaro and the Rwenzori Mountains, to the deserts of northern Kenya where she is befriended by armed bandits and rescued by Turkana fishermen, to a stand-off with four Ugandan men intent on harm, and to a voyage on a 'floating village' on the mighty Zaire River. Everywhere she goes Heather is aided by locals and travellers alike, who take her into their homes and hearts, helping her to truly understand the spirit of ubuntu - a Bantu word meaning 'I am because you are'.

Ubuntu is the extraordinary story of a young woman who, alone and against all odds, rode a motorcycle to some of the world's most remote, beautiful and dangerous places.

Heather Ellis has worked as a radiation safety technician, a motorcycle courier, a journalist for News Ltd and in communications for an NGO. She lives near Melbourne with her three children, and is currently writing the sequel to Ubuntu while working as a freelance journalist and professional speaker. And she still rides motorcycles.