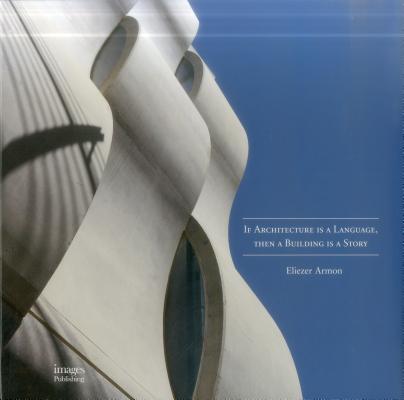 If Architecture Is a Language, Then a Building Is a Story

"The difference between inspirational stories to the ones lacking inspiration often depends on the order the storyteller chooses to place his creation. In this sense, not only does this book represent a series of architect Eli Armon's architectural achievements, but also provides a statement on his work in retrospect by attempting a story narrative that looks at the tale of creation. Thus, a new creation is formed, designed by choosing the picture angle, by editing the order of the pictures, and by writing words that interlace into a melody of structure and creation. Armon's lyrical and philosophical points of view add another dimension to his architectural works that have created a texture of inspiration spots and have already turned into Places throughout our country." - Abridged text, from the Introduction. Armon is inspired by images from Israel and its landscape, worldwide cultures and the martial arts. His multidisciplinary and unconventional professional approach sees in the architectural planning the materialization of views, existential concepts, circles of life and faith, as one united and multifaceted work. His work is that of a curious researcher. It sprouts from biblical sources, the Hebrew letters, Jewish tradition and Kabbalah. List of projects: Holon Wolfson Railway Station, Tel Aviv; Lehavim-Rahat Railway Station; Beer-Sheva Central Railway Station; Department of Public Works, Beer-Sheva; Ministry of Agriculture & Rural Development; Abraham's Well Visitors' Center, Beer-Sheva; Yad Sara, Beer-Sheva; Officers School Synagogue, Mitzpe Ramon; Yod Alef Community Center, Beer-Sheva; Ramot Sportive Community Center, Beer-Sheva; Kindergarten and Center for the Care of the Elderly, Meitar; El-Zahara School, Lod; Omer Comprehensive School; The Sports Hall, Omer; Culture Hall, Omer.

Eliezer Armon was born in Tel Aviv, and was a part of the Ha'Noar Ha'Oved Youth movement. He graduated from the Yad Singelowski vocational school as an Electronic Practical Engineer. He is a graduate of the faculty of Architecture and Town Planning from the Technion in Haifa. He is a Lt. Colonel in the IDF and holds the rank of 5th DAN in the Dennis Survival Ju-Jitsu method. He served as the chief city engineer of the Beer-Sheva municipality. Since 1993 he is the CEO of Armon Architecture and Town Planners, Ltd. Eli Armon's activities cover the wide range of architectural planning services, from furniture design to town planning. Armon's work constantly searches for the source and origin of creativity, and his view is that there is a perfect cognitive alignment between architecture and military leadership - in that they share elements of creative structural response. Hence the term Architect of Victory.
Loading...
or
Not Currently Available for Direct Purchase