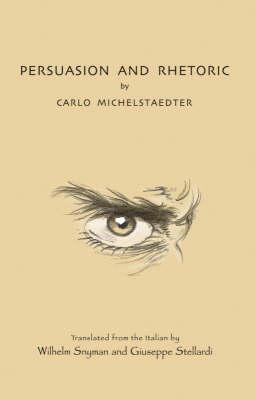 Carlo Michelstaedter (1887-1910) committed suicide at the age of 23, days after completing this devastating treatise on the human condition and the course of Western civilization. This work was deemed to be so radically nihilistic, or so radically idealistic, that publishers shied away from it for decades. This new English translation brings to life the heartfelt text of the precocious Italian-Jewish writer, poet, and painter, who, refusing to compromise with life, remained loyal to his ideal of a perfect world. Keenly aware of the inevitable catastrophe that the values of his time held in store for humanity, Carlo Michelstaedter, with Persuasion and Rhetoric, also provides a pithy - albeit idiosyncratic - synthesis of the major currents of philosophical thought that held sway at the beginning of the 20th century. Its searing honesty and mordant critique have not lost any immediacy, almost a century after the work was completed as a university thesis. The reader is challenged to re-examine the dull norms, conventions, and patterns of thought all too readily adopted as humanity willingly, pathetically courts its own demise. And yet, amidst this gloomy vision, Michelstaedter forces the reader to re-appraise the here-and-now, to summon the courage to live a life worthy of being lived.