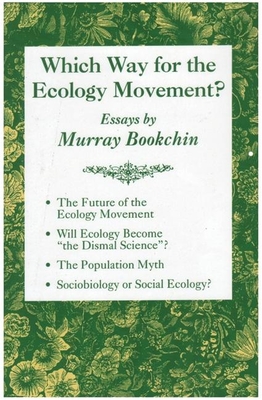 Which Way for the Ecology Movement?

In the essays that make up this book, Murray Bookchin calls for a critical social standpoint that transcends both "biocentrism" and "ecocentrism." A call for new politics and ethics of complementarity, in which people, fighting for a free, nonhierarchical, and cooperative society, begin to play a creative role in natural evolution. Bookchin attacks the misanthropic notion that the environmental crisis is caused mainly by overpopulation or humanity's genetic makeup.
He resolutely points to social causes--patriarchy, racism, and a capitalistic "grow or die" economy--as some of the problems the environmental movement must deal with. These ideas have to be confronted by environmentally concerned readers if the ecology movement is not to destroy its own potential as a force for social change and the achievement of a truly ecological society.
Murray Bookchin's writings have profoundly influenced ecological thinking over the last forty years. Now in his 80s, he has been a life-long radical, a trade union activist in the 30s and 40s, an innovative theorist in the 60s, and a leading participant in the anti-nuclear and radical wing of the Greens in the 70s and 80s. His ideas on social ecology have been important contributions to left libertarian thinking.

Murray Bookchin is cofounder of the Institute for Social Ecology. An active voice in the ecology and anarchist movements for more than forty years, he has written numerous books and articles, including: Anarchism, Marxism and the Future of the Left, Social Anarchism or Lifestyle Anarchism, The Spanish Anarchists, The Ecology of Freedom, Urbanization Without Cities, and Re-enchanting Humanity. He lives in Burlington, Vermont.
Loading...
or
Not Currently Available for Direct Purchase