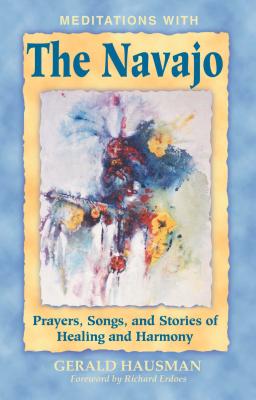 Meditations with the Navajo (Paperback)

Prayers, Songs, and Stories of Healing and Harmony

A collection of stories, poems, and meditations that illuminate the spiritual world of the Navajo.

• Explores the Navajo's fundamental belief in the importance of harmony and balance in the world.

• Shares Navajo healing ways that have been handed down for generations.

Navajo myths are among the most poetic in the world, full of dazzling word imagery. For the Navajo, who call themselves the Dine (literally, "the People"), the story of emergence--their creation myth--lies at the heart of their beliefs. In it, all the world is created together, both gods and human beings, embodying the idea that change comes from within rather than without. Poet and author Gerald Hausman collects this and other stories with meditations that together capture the essence of the Navajo people's way of life and their understanding of the world. Here are myths of the Holy People, of Changing Woman who teaches the People how to live, and of the trickster Coyote; stories of healings performed by stargazers and hand tremblers; and songs of love, marriage, homecoming, and growing old. These and the meditations that follow each story reveal a world--our world--that thrives only on harmony and balance and shares the Dine belief that the most important point on the circle that has no beginning or end is where we stand at the moment.

Gerald Hausman is a frequent storyteller at college writers programs and at young authors conferences. Recently, he performed at the Young Authors Conference in Kaiserslautern, Germany as a guest of Department of Defense Dependent Schools. His lively presentations, complete with a myriad of sound effects, have earned him praise from storytellers, speakers, writers, and listeners.

Richard Erdoes is the author of more than 21 books, including Lame Deer: Seeker of Visions, and American Indian Myths and Legends. An Austrian-born historian, ethnographer, and artist, he has contributed to many publications, including the New York Times, Time, Life, Fortune, Smithsonian, and the Saturday Evening Post. He lives in New Mexico.

Praise For Meditations with the Navajo: Prayers, Songs, and Stories of Healing and Harmony…

"Meditations with the Navajo is a work refreshingly unlike many others dealing with Dine mythology. It is free of the anthropologist's specialized verbiage. It speaks to people."
— Richard Erdoes, author of Lame Deer: Seeker of Visions and Crying for a Dream

"In his reverent, gentle workings of traditional themes, Gerald Hausman displays a deeper understanding of the natural world than most of the writers of our generation."
— Joseph Bruchac, Abenaki storyteller and author of Keepers of the Earth
or support indie stores by buying on
Copyright © 2020 American Booksellers Association