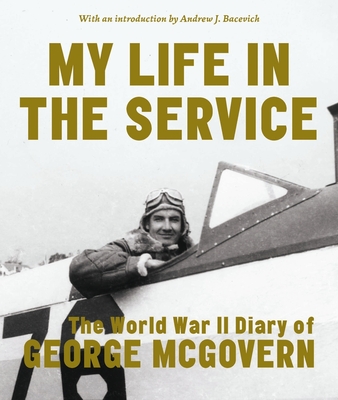 My Life in the Service

Before he was a celebrated politician, Senator George McGovern served as a B-24 bomber pilot in World War II. Based in Italy, he flew thirty-five combat missions over Europe between 1944 and 1945.

My Life in the Service features a facsimile of the diary George McGovern kept from his first days of basic training until the end of the war. Hastily jotted down in his exacting hand whenever he had the impulse to put his thoughts on paper, the pages convey the immediacy of McGovern’s wartime experiences. Each lined sheet is decorated with illustrations, alongside aphorisms on battle and democracy from some of history’s greatest minds. This document powerfully evokes an era, while it predicts the man George McGovern would become. (For ease of reading, a typed transcription of the diary is included.) As Andrew Bacevich states in his introduction, “We also come to understand why McGovern, having experienced combat at first hand, was not in later life among those given to glorifying war or to sending their fellow citizens to fight when not absolutely necessary.”

“We are all heaving a sigh of relief that it is in the past,” McGovern wrote near the end of his training, which took him from South Dakota to Missouri, Illinois, Texas, Oklahoma, Kansas, Nebraska, and Idaho. Yet McGovern excelled at flight school and became a skilled pilot. He earned many decorations including the Distinguished Flying Cross for saving the lives of his crew.

My Life in the Service provides a lively and intimate glimpse into the Allied bombing of Nazi-occupied Europe. The B-24, nicknamed the “Flying Coffin,” was unwieldy, uncomfortable, and, as McGovern himself learned, unreliable. “Needless to say old terra firma felt pretty good,” McGovern wrote after one of many rough landings detailed in his diary. McGovern endured dangerous weather, tire blowouts, and midair engine losses. He returned home without a scratch, though many of his friends were less fortunate. “I hated like everything to see him go,” he wrote of one who died in a crash. McGovern counted down the missions he had to complete before he returning to his hometown sweetheart, Eleanor—they married during his service, and she gave birth to their daughter while he was overseas.

His final mission, on April 25, 1945, was the worst of them all. “All our hydraulic lines were cut hopelessly so to land we had to crank our gear down manually, pump the flaps down, and then throw out parachutes to stop us when we were on the ground,” he wrote. “We ended up at the end of the runway O.K. with no further damage to the planes or the fellows. We had well over 75 holes in our plane—some of which were amazingly close to some of us. In a way this was a good one to quit on because it made me more thankful than ever that I had finished.”

That mission proved to be the last that the 15th Air Force flew. Less than two weeks later, the war ended. “I should consider myself lucky not to have missed that one,” McGovern wrote, with the pluck that enlivens every page of this book, “even though it did scare the devil out of me.”

Before he was a celebrated politician, or even a college graduate, Senator George McGovern served as a B-52 bomber pilot in World War II. Based out of Italy, McGovern flew thirty-five combat missions over German-occupied Europe from 1943-44, earning the Distinguished Flying Cross for his ingenuity in the face of adversity. After the war, Sen. McGovern returned to his family and his studies, becoming a professor of history and political science in his native South Dakota. He left the academy to enter politics full-time in 1955, beginning a decades long career by successfully bolstering the state’s Democratic Party. Sen. McGovern was elected to Congress in 1956 and 1958, and then to the Senate in 1962, an office he would hold for eighteen years. He was the Democratic Party’s nominee for president in 1972.