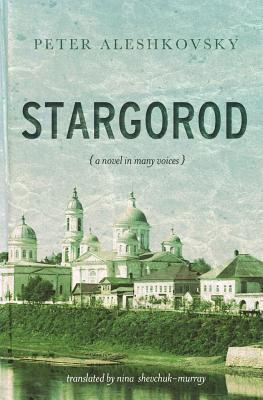 A novel in many voices

"Stargorod is emphatically not big..."

So begins Peter Aleshkovsky's profound, humorous, mystical and poetic novel in stories - a tribute to Russian provincial life that is a modern heir to Gogol's Mirgorod tales.

Stargorod is a mid-sized provincial city that exists only in Russian metaphorical space. It has its roots in Gogol, and Ilf and Petrov, and is a place far from Moscow, but close to Russian hearts. It is a place of mystery and normality, of provincial innocence and Black Earth wisdom. Strange, inexplicable things happen in Stargorod. So do good things. And bad things. A lot like life everywhere, one might say. Only with a heavy dose of vodka, longing and mystery.

Peter Aleshkovsky's writing is vivid and descriptive. His rich, character-driven stories are allegorical and representative of their time and place. In Stargorod, he shows why he is one of modern Russia's most beloved realistic writers, and why he has been thrice nominated for Russia's most prestigious literary prize.

Stargorod is a novel in stories, two novels, actually. The first collection of stories (Stargorod: Voices from the Choir) was written and published in Russian the 1990s, the second (The Institute of Dreams) in the 2010s. This new translation collects both sets of stories into a single whole of 50+ tales about individuals and incidents that, taken as a whole, offer a vivid portrait of Russia before and after the collapse of the USSR. The stories and characters link to one another across time and space, filling out a portrait of Russian life outside the capital, one that normally exists far from Western eyes.