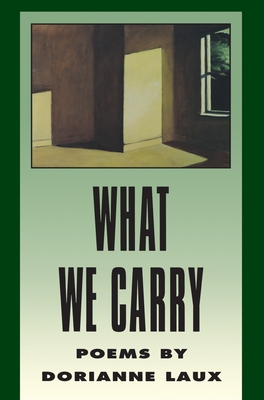 What We Carry (American Poets Continuum #28)

Finalist, 1994 National Book Critics Circle Award for Poetry. Dorianne Laux's poetry is a poetry of risk; it goes to the very edge of extinction to find the hard facts that need to be sung. What We Carry includes poems of survival, poems of healing, poems of affirmation and poems of celebration.

Dorianne Laux was born in 1952 in Augusta, Maine and is of Irish, French and Algonquin Indian heritage. In 1983 she moved to Berkeley, California where she began writing in earnest. Five years later she earned her B.A. degree in English from Mills College. Laux's first book of poems, Awake, published by BOA Editions in 1990, was nominated for the San Francisco Bay Area Book Critics Award for Poetry. Her poetry has appeared in numerous American journals and anthologies. She has received poetry fellowships from the MacDowell Colony and the National Endowment for the Arts. Currently, she teaches creative writing at the University of Oregon in Eugene, Oregon.
Loading...
or
Not Currently Available for Direct Purchase