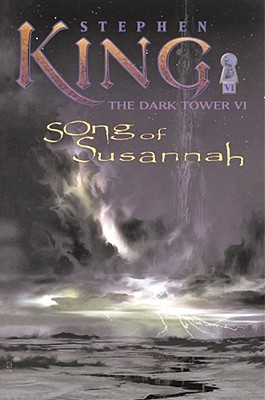 The Dark Tower VI: Song of Susannah with 10 full-color illustrations by Darrel Anderson

The next-to-last novel in Stephen King's seven-volume magnum opus, Song of Susannah is at once a book of revelation, a fascinating key to the unfolding mystery of the Dark Tower, and a fast-paced story of double-barreled suspense.

To give birth to her "chap," demon-mother Mia has usurped the body of Susannah Dean and used the power of Black Thirteen to transport to New York City in the summer of 1999. The city is strange to Susannah...and terrifying to the "daughter of none," who shares her body and mind.

Saving the Tower depends not only on rescuing Susannah but also on securing the vacant lot Calvin Tower owns before he loses it to the Sombra Corporation. Enlisting the aid of Manni senders, the remaining katet climbs to the Doorway Cave...and discovers that magic has its own mind. It falls to the boy, the billy-bumbler, and the fallen priest to find Susannah-Mia, who, in a struggle to cope -- with each other and with an alien environment -- "go todash" to Castle Discordia on the border of End-World. In that forsaken place, Mia reveals her origins, her purpose, and her fierce desire to mother whatever creature the two of them have carried to term.

Eddie and Roland, meanwhile, tumble into western Maine in the summer of 1977, a world that should be idyllic but isn't. For one thing, it is real, and the bullets are flying. For another, it is inhabited by the author of a novel called 'Salem's Lot, a writer who turns out to be as shocked by them as they are by him.

These are the simple vectors of a story rich in complexity and conflict. Its dual climaxes, one at the entrance to a deadly dining establishment and the other appended to the pages of a writer's journal, will leave readers gasping for the saga's final volume (which, Dear Reader, follows soon, say thank ya).