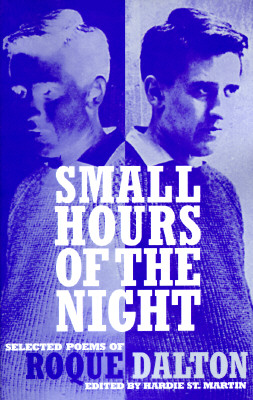 Small Hours of the Night

Selected from 10 of his collections and two posthumous manuscripts, Small Hours of the Night is an English-only edition of the poems of Salvadorian revolutionary Roque Dalton. Written from exile and in prison, Dalton's work deftly balances love, death, revolution, and politics, with compelling language and seductive verse. The volume includes introductory essays by Dalton's friends and contemporaries: Ernesto Cardenal, Claribel Alegría, and Hardie St. Martin.

Praise For Small Hours of the Night: Selected Poems of Roque Dalton…

"Finally and gloriously here are the poems of Roque Dalton, one of the most compelling Central American poets it has been my privilege to read."

"How amazing to talk of love and death in the same breath. Small Hours of the Night is a collection of seductive verse. Roque Dalton's poetry celebrates man's desire to live in this hemisphere. This man's work hits me harder than springtime."

"[Dalton's poetry illustrates] his profound conviction that the poet can and must, in his life as in his work, serve as the finely-honed scalpel of change, both in word and deed..."

Roque Dalton García (San Salvador, El Salvador, 14 May 1935 – Quezaltepeque, El Salvador, 10 May 1975) was a leftist Salvadoran poet, essayist, journalist, and activist. He is considered one of Latin America's most compelling poets. He wrote emotionally strong, sometimes sarcastic, and image-loaded works dealing with life, death, love, and politics. In 1975, he was executed by members of the People's Revolutionary Army (ERP) after getting into a dispute with their leader. He is remembered for his bohemian lifestyle and the jovial, irreverent personality reflected in his literary work, as well as his commitment to social causes in El Salvador. Dalton's writing includes almost 15 poetry collections, a novel, a personal testimony, and a play, as well as short stories, critiques, and essays on both literature and politics.

Hardie St. Martin was one of the most prominent Spanish to English translators of the last century, receiving a Guggenheim Fellowship, a P.E.N International Translation Award, and an ALTA award during his decades long career. He died in Barcelona in 2007.

Jonathan Cohen is a poet, translator, essayist, and scholar of inter-American literature