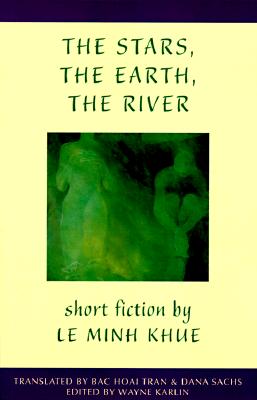 The Stars, The Earth, The River

This collection of 14 stories—each a harrowing sketch of the Vietnam War and its aftermath—offers American readers a glimpse of familiar territory, but from an unfamiliar perspective. Often writing from a young woman's point of view, Le Minh Khue, a war veteran who served in the Youth Volunteers Brigade, uses simple, understated prose to describe numbing horrors. Her stories explore themes such as love and war, the tangles of family relationships, and the complexities of post-war life. Khue gives readers a look into Vietnam before, during, and after the war with the United States.

The Stars, the Earth, the River contains an excellent introduction by the translators, grounding the stories in Le Minh Khue's personal history. You simultaneously feel the rage of the author and the narrator when Khue disparagingly notes that the conversations around her center on luxuries, motor scooters, and business deals. Of what use, these stories ask, is such suffering? How can a culture honor the losses of war?


Praise For The Stars, The Earth, The River: Short Stories by Le Minh Khue…

"The author is revealed as a fine, spare stylist with a flaire for satire." —New York Times Book Review


"[Khue] gives us a rare insider's look at Vietnam." —The Colombus Dispatch

"[Khue's] stories convey with a rare combination of compassion and objectivity the dual nature of a grievously damaged country and its people's stoic resilience." —Kirkus Reviews

Le Minh Khue, one of the leading writers of Vietnam, is currently an editor at the Vietnam Writers' Association Publishing House in Hanoi. A veteran of the American/Vietnam War, she served as a member of the Youth Volunteers Brigade (Sappers) and as a war correspondent.

Wayne Karlin is a novelist, editor, and teacher. He was the Professor of Languages and Literature at the College of Southern Maryland until his retirement in 2017.

Bac Hoai Tran is a writer and Vietnamese language professor. He is the author of several conversational Vietnamese textbooks.