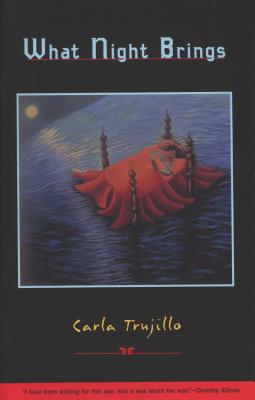 What Night Brings focuses on a Chicano working-class family living in California during the 1960s. Marci-smart, feisty and funny-tells the story with the wisdom of someone twice her age as she determines to defy her family and God in order to find her identity, sexuality and freedom.

"Carla Trujillo's What Night Brings puts one more wonderful Latina novelist on the must-read list right up there beside Sandra Cisneros, Julia Alvarez and Cristina Garcia. This moving story, told in the completely convincing voice of its young protagonist, explores living with domestic abuse and longing for the maternal protection that always fails to materialize. We touch the mysteries of religion in a child's life, and are completely captivated by a young girl's budding lesbian identity. Character and situation building are exemplary, yet we are hit hard when the book takes its final turn. What Night Brings is a page-turner that lingers long after the last page has been turned."-Margaret Randall

"A story that is at once heartbreaking and hilarious, beautifully told by a wise and wise-cracking young girl."-Sandra Cisneros

Carla Trujillo was born to a working-class family in Las Vegas, Nevada, and grew up in northern California. She has lived in the San Francisco Bay area for the past 15 years. Her extended family and roots are New Mexican (Chicana). She works as an administrator in diversity -education and advocacy at the University of California, Berkeley. She is the editor of the anthology, Chicana Lesbians: The Girls Our Mothers Warned Us About, which won a Lambda Book Award and the Out/Write Vanguard Award in 1992 and is now in its third printing. Her critical study, Living Chicana Theory, is in its second printing and widely used in college classrooms. What Night Brings is her first novel; excerpts from What Night Brings have already won awards from the Astraea Lesbian Writers Fund and Writers at Work.
or
Buy Here
Copyright © 2020 American Booksellers Association