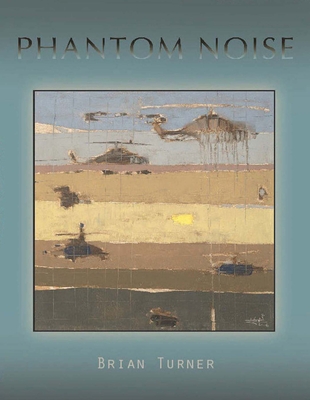 In the aftermath of best-selling Here, Bullet, Brian Turner deftly illuminates existence as both easily extinguishable and ultimately enduring. These prophetic, osmotic poems wage a daily battle for normalcy, seeking structure in the quotidian while grappling with the absence of forgetting.

Brian Turner earned an MFA from the University of Oregon before serving with the US Army as an infantry team leader in Iraq. He has been featured on National Public Radio, The NewsHour with Jim Lehrer, and the BBC. He has received an NEA Literature Fellowship in Poetry, the Amy Lowell Poetry Traveling Scholarship, and a fellowship from the Lannan Foundation.

"In Phantom Noise, the speaker recognizes the degree to which language is a co-creative of reality...and as such, these poems begin to interrogate the speaker’s entanglement in acts that he had heretofore largely only recorded.”The American Poetry Review

"[Turner's] writing is crisp, reportorial, earnest... [He] challenges us to experience war at its worst and confront its human costs without ideology or nationalism."The Georgia Review

"In many ways, this is not a collection for the faint-hearted, dealing as it does with deaths and mutilations. However, its scope is broader than that, as it also skillfully looks at history, culture, love, and family."The North

"[Turner's] is a poetry of horror, but also one of love and loss, infused with the restless spirits of the dead who hover over the living on both sides...His is a voice of honesty and despair, of imperfection and a self-awareness that most of us can only pretend to possess."Connotation Press: An Online Artifact

"Turner's book of poems is something that transcends poetry..."New Pages

"Turner's second book, Phantom Noise, continues to bear witness...looking on with equal parts courage and concern, but also as a poet whose language is always drawing comparisons, shifting the picture to encompass not just one tragedy, but a world's worth..."Salamander

"It's hard to think of a better way around ideology than poetry like this. Turner shows us soldiers who are invincible and wounded, a nation noble and culpable, and a war by turns necessary and abominable. He brings us closer to our own phantom guilt and speaks the words that we both do and do not want to hear."The Washington Post

"...we need [Turner's] bracing bullet-borne language” as he tries to reconcile the chaos of Iraq with the demands of the poetic line."The New York Times