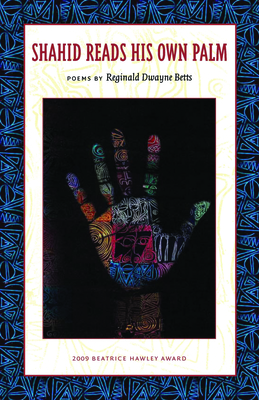 Shahid Reads His Own Palm


Praise For Shahid Reads His Own Palm…

"Inside silence there is a sliver of light that is the seed of the music of these poems, the origin of a melodic range we seldom see in a poet's first collection. These melodies move in a harmonic range affirming human struggle with an extraordinary elegance. This collection of song is definite evidence of the gift."Afaa Michael Weaver

"Betts doesn't just have a powerful story to tell. He is a true poet who can write a ghazal that sings, howls, rhymes, and resonates in memory years after it was first read."Jericho Brown, On the Seawall

"...these poems in turn sear and moan, are impossibly restless and at times starkly silent."American Poet

"There's an authority in Betts's voice that carries us, and his voice is governed by boldness and consonance."Devil's Lake

American prisons are the new slave ships for Betts. The image of a black man in chains and cuffs is an image that for many is much to contemplate. Here in this disturbing book of poetry Shahid Reads His Own Palm, Reginal Dwayne Betts takes us back into the whole Afro-American Diaspora. A latter day Paul D, in 'yesterdays yoked'the lid is rusted solid on the tragedy that is the Black man and women's experience in the new world."Stride Magazine

This book is disturbing. Technically it is solid and very American in shape. Its themes are clear, to the point, and very accurate. Alienation and deconstruction of self fill almost every line.”New Pages

...Betts allows his readers to become engulfed in the minds and experiences of different men that have been imprisoned and their perceptions of judgments imposed upon them from the outside world. The poems, in often graphic detail, explain the chilling truths of prison lives weighed by lost dreams and regret.”AFRO

"The 'I' of these poems I appreciate for his emotionally balanced tone, so as not to fetishize (glorify or denigrate) the incarcerated, or give us spectacle and sentimentality. The words which compose these lines are well-considered. The lines which compose these poems are clean, even lithe. They give space, or open themselves up to the reader without pandering or relying on cliche."Barbara Jane Reyes

Dwayne Betts’ poems ?from the first moment I encountered them ?read like revelation. This poet has entered the fire and walked out with actual light inside him. These poems ?clear, muscular, musical ?are what the light says. I’ve waited for this book for years!”?Marie Howe

These fierce and skillful poems are for our time and place the cry of Blake’s London and of his Auguries of Innocence: A dog starv’d at his master’s gate/ Predicts the ruin of the state. Here is a brother at his brother’s gate. Shahid. A witness. Here, as C.D. Wright has said, is our One Big Self.”Jean Valentine

Reginald Dwayne Betts received the Holden Fellowship from the Warren Wilson MFA Program for Writers. A Cave Canem fellow, Breadloaf Writer's Conference scholarship recipient, and graduate of Prince George's Community College and the University of Maryland, his poetry has appeared in such journals as Ploughshares and Poet Lore. His memoir A Question of Freedom has just been published by Avery Books/Penguin.
Loading...
or support indie stores by buying on