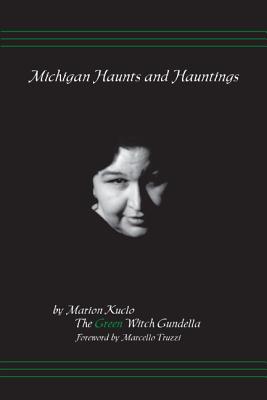 Do you believe in ghosts? You will after reading this compilation of tales of the supernatural from Michigan's rich oral history! Some stories, such as the North American Indian legends and a few of the older accounts are from the author's personal folklore collection. Each was carefully researched from interviews with witnesses whenever possible. This permits many obscure and fascinating details in these tales of haunts and hauntings which in turn illuminate our local cultural heritage. Also contains a map of the haunted sites for readers who want to do a little research into Michigan's enthralling past on their own!

Marion Kuclo - known best as Gundella - is a descendent of the Green Witches of Scotland and an active member of a traditional coven.  An avid collector of folklore and ghost stories, Gundella has gained a widespread reputation for exciting and dramatic story-telling.  She has been a frequent contributor to the Detroit Free Press, the Detroit News, and the Observer-Eccentric Newspapers, writing articles on subjects ranging from superstition and the occult, to travel and culinary arts, and, of course, ghost stories.