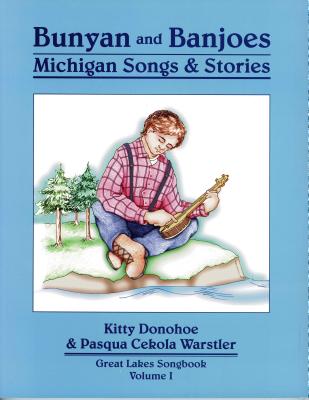 Bunyan and Banjoes is an enchanting potpourri of folklore, songs, Indian legends, recipes, history, and other Michigan-based activities. This volume includes stories about how maple sugar is made; the history of the early fur trade, mining logging, and automobile industries; the building of the Mackinac Bridge and the Soo Locks; the sad loss of the steamer ""Chicora""; as well as several songs adapted to sign language. This charming collection is brought to vivid life by Kitty Donohoe's songs and writings and Pasqua Warstler's delightful illustrations, puzzles and mazes which are designed to delight both adults and children alike. Originally a collection of songs about Michigan written by Kitty Donohoe to honor Michigan's 150th birthday celebration, the songs became the first edition of Bunyan and Banjoes, which was an immediate success. Learned and performed by school children all over Michigan, they are often thought to be traditional songs. Whether about lumberjacks, voyageurs or rollicking young sailors, they embrace the spirit of this Great Lakes State. Bunyan and Banjoes is available in several formats: Paper, Paper with Cassette, Paper with CD, and Cassette only.

Ann Arbor based songwriter and Michigan Emmy recipient Kitty Donohoe is not an Irish or Celtic singer, but she clearly draws from that part of her heritage, as well as her American roots, as an artist. Iconic WFMT-Chicago folk dj Rich Warren calls Kitty “far above and beyond most singersongwriters.” She writes music that has been called “earthy, luminous and compelling” (The Weekender) and she’s been praised in the press equally for her voice, her musicality, and her songwriting. Sing Out!, one of the oldest and most respected folk music magazines in the industry, says that Kitty is “ one of the rare singer-songwriters to sensuously weave words and melody into a strong and mezmerizing fabric.” Over the years Kitty has opened for a variety of artists, from Doc Watson to David Bromberg, from Bruce Cockburn to Cheryl Wheeler – and in 2008 she and sideman David Mosher took the stage at an Obama rally just before Bruce Springsteen. Already known for years for her songwriting, Kitty’s visibility escalated to a much bigger world when she wrote a song called ‘There Are No Words’ on September 11, 2001. In addition to the Emmy Kitty received for the song, it’s been featured in a documentary, which led to her singing it live at the Dedication of the Pentagon 9/11 Memorial in 2008 – an experience that she calls “profound.” Growing up in a large, creative family outside of Detroit, Kitty started ‘making up songs’ and playing the piano at a young age, then graduated to the guitar in high school, when she began going to coffeehouses and open mic nights, bringing the guitar and her own songs. When she became involved in Irish music Kitty bought a cittern (a large mandolin), and she still primarily plays guitar, cittern and piano. Kitty is a solid solo performer, and also often brings multi-instrumentalist David Mosher to her concerts, where he backs her up with guitar, fiddle, mandolin, and vocals. And although some of her originals may sound like they were written 100 years ago and others are clearly contemporary, one thing is certain: with or without a band behind her, Kitty’s striking voice carries it all, delivering each song with power and emotion.
or support indie stores by buying on
Copyright © 2020 American Booksellers Association