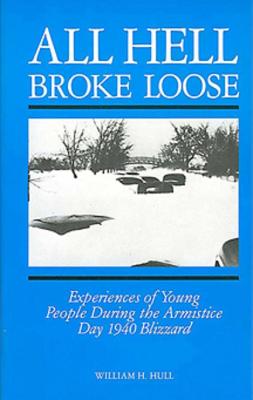 Experiences of Young People During the Armistice Day 1940 Blizzard

How young people coped with the storm of the century - 59 people died in Minnesota on November 11, 1940 when the worst blizzard ever hit Minnesota unexpectedly. Violet walked from Seven Corners in Minneapolis to 32nd street with snow over her knees, in subzero temperature, with only saddle oxfords and a light wrap. Farmers lost thousands of turkeys - Herb tells of rendering a half million frozen gobblers. Alvin in Warroad barely got his boat back to the dock. Andy and a group of Iron Rangers, preparing for deer hunting the next weekend, spent this weekend struggling through the blizzard, barely saving their lives. Dwight, of Marshall, crawled 200 yards to build a fire for a man about to freeze to death. Sherman kept isolated Albert Lea in touch with the world. Read these stories and many more in All Hell Broke Loose, and experience the blizzard.

William H. Hull received a M.A. degree from Southern Methodist University in Dallas, Texas. Later, he moved to Minnesota, where he collected first-hand accounts about the terrible storm of 1940.