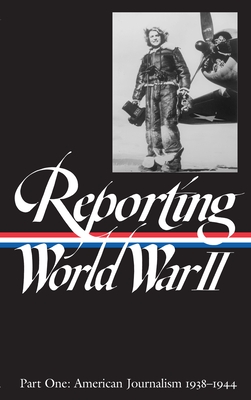 This Library of America volume is the first of a unique two-volume anthology. Drawn from original newspaper and magazine reports, radio transcripts, and wartime books, Reporting World War II captures the intensity of the war’s unfolding drama as recorded by the best of a remarkable generation of journalists, whose talents, sense of purpose, and physical courage remain unsurpassed in the annals of war reporting. Here in one collection, over eighty writers, famous and forgotten alike, confront the crucial events of those years in writing of exceptional skill and emotional force.

The first volume traces the buildup to war and the first years of fighting: the Munich crisis, Kristallnacht, the fall of Poland and France, Pearl Harbor and Bataan, Guadalcanal and Salerno. William L. Shirer, Sigrid Schulz, and Howard K. Smith observe Nazi Germany from the inside; Edward R. Murrow and Ernie Pyle report from London during the Blitz; A.J. Liebling chronicles the Tunisian campaign; Margaret Bourke-White casts her eye on the Russian and Italian fronts. In a time when public perceptions were shaped mainly by the written word, correspondents like these were often as influential as politicians and as celebrated as movie stars.

Writers who covered the home front are included as well: E.B. White at a bond rally in Maine, Brendan Gill on gas rationing, James Agee’s caustic reviews of Hollywood war movies. And so are the famous literary figures who covered the war: Gertrude Stein in occupied France, John Steinbeck on a troopship bound for Italy. Here too are writers on aspects of the war still often neglected: George S. Schuyler and other African-American journalists attacking racism and segregation in the armed forces; Mary Heaton Vorse on the women working in the defense industries; a firsthand account of the internment of Japanese-Americans.

This volume contains a detailed chronology of the war, historical maps, biographical profiles of the journalists, explanatory notes, a glossary of military terms, and an index. Also included are thirty-two pages of photographs of the correspondents, many from private collections and never seen before. A companion volume covers 1944–1946.