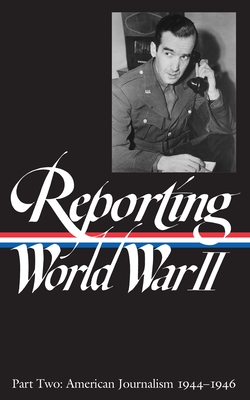 This Library of America volume (along with its companion) evokes an extraordinary period in American history—and in American journalism. Martha Gellhorn, Ernie Pyle, John Hersey, A.J. Liebling, Edward R. Murrow, Janet Flanner: in a time when public perceptions were shaped mainly by the written word, correspondents like these were often as influential as politicians and as celebrated as movie stars.

This second volume traces the final eighteen months of the war: the campaign in Italy and the Southwest Pacific, the Normandy invasion, the island battles from Saipan to Iwo Jima, the liberation of Paris, the Battle of the Bulge, the fall of Berlin, the bombing of Hiroshima and Nagasaki. Here are Ernie Pyle bearing witness to war in the infantrymen’s foxholes; A.J. Liebling on D-Day; Robert Sherrod and Tom Lea landing with Marines and registering the horrors of Pacific Island warfare; Martha Gellhorn and Edward R. Murrow indelibly reporting on the liberation of Dachau and Buchenwald. Here too are two great book-length works, included in full: Bill Mauldin’s Up Front, the classic evocation of war from the GI’s point of view, complete with his famous cartoons, and Hiroshima, John Hersey’s compassionate account of the first atomic bombing and its aftermath.

Writers who covered the home front are included as well: S.J. Perelman on the absurdities of wartime advertising, James Agee on the impact of wartime newsreels, E.B. White on the United Nations conference in San Francisco. Here too are writers on aspects of the war still often neglected: Vincent Tubbs and Bill Davidson on the combat role of African-American soldiers; Susan B. Anthony II on working in the Navy Yard; I.F. Stone protesting U.S. government inaction in the face of Nazi genocide.

This volume contains a detailed chronology of the war, historical maps, biographical profiles of the journalists, explanatory notes, a glossary of military terms, and an index. Also included are thirty-two pages of photographs of the correspondents, many from private collections and never seen before.