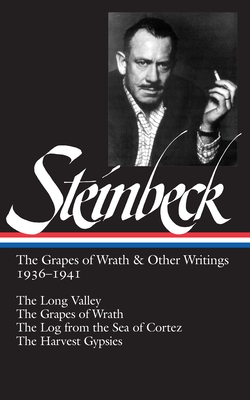 The second volume in The Library of America’s authoritative edition of John Steinbeck features his acknowledged masterpiece, The Grapes of Wrath. Written in an incredibly compressed five-month period, the novel had an electrifying impact upon publication in 1939. Tracing the journey of the Joad family from the dust bowl of Oklahoma to the migrant camps of California, Steinbeck creates an American epic, spacious, impassioned, and pulsating with the rhythms of living speech. The novel won the Pulitzer Prize and has since sold millions of copies worldwide.

This text of The Grapes of Wrath has been newly edited based on Steinbeck’s manuscript, typescript, and proofs. Many errors have been corrected, and words omitted or misconstrued by his typist have been restored. In addition, The Harvest Gypsies, his 1936 investigative report on migrant workers, which laid the groundwork for the novel, is included as an appendix.

The Long Valley (1938) displays Steinbeck’s brilliance as a writer of short stories, including such classics as “The Chrysanthemums,” “The White Quail,” “Flight,” and “The Red Pony.” Set in the Salinas Valley landscape that was Steinbeck’s enduring inspiration, the stories explore moments of fear, tenderness, isolation, and violence with poetic intensity.

The Log from the Sea of Cortez, an account of the 1940 marine biological expedition in which Steinbeck participated with his close friend Ed Ricketts, is a unique blend of science, philosophy, and adventure, as well as one of Steinbeck’s most revealing expositions of his core beliefs. First published in 1941 as part of the collaborative volume Sea of Cortez, Steinbeck’s narrative was reissued separately a decade later, augmented by the moving tribute “About Ed Ricketts.”

This volume contains a newly researched chronology, notes, and an essay on textual selection. It is the second of four volumes in The Library of America edition of John Steinbeck’s writings.

“This corrected edition of The Grapes of Wrath is essential for all serious American literature collections.” —Library Journal

The editors of this volume are Robert DeMott and Elaine A. Steinbeck (1914–2003). Robert DeMott is the Edwin and Ruth Kennedy Distinguished Professor at Ohio University and the author of Steinbeck’s Typewriter, an award-winning book of critical essays. Elaine A. Steinbeck, co-editor of Steinbeck: A Life in Letters, was married to John Steinbeck from 1950 until his death in 1968.
Loading...
or
Not Currently Available for Direct Purchase