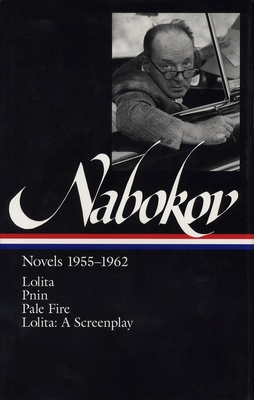 This Library of America volume is the second of three volumes presenting the most authoritative versions of the English works of the brilliant Russian émigré, Vladimir Nabokov.

Lolita (1955), Nabokov’s single most famous work, is one of the most controversial and widely read books of its time. Funny, satiric, poignant, filled with allusions to earlier American writers, it is the “confession” of a middle-aged, sophisticated European émigré’s passionate obsession with a twelve-year-old American “nymphet,” and the story of their wanderings across a late 1940s America of highways and motels. (Nabokov’s film adaptation of Lolita, as originally written for director Stanley Kubrick, is also included.)

Pnin (1957) is a comic masterpiece about a gentle, bald Russian émigré professor in an American college town who is never quite able to master its language, its politics, or its train schedule. Nabokov’s years as a teacher provided rich background for this satirical picture of academic life, with an unforgettable figure at its center: “It was the world that was absent-minded and it was Pnin whose business it was to set it straight. His life was a constant war with insensate objects that fell apart, or attacked him, or refused to function, or viciously got themselves lost as soon as they entered the sphere of his existence.”

Pale Fire (1962) is a tour de force in the form of an ostensibly autobiographical poem by a recently deceased American poet and a critical commentary by an academic who is something other than what he seems. Its unique structure, pitting artist against seemingly worshipful critic, sets the stage for some of Nabokov’s most intricate games of deception and concealment.

The texts of this volume incorporate Nabokov’s penciled corrections in his own copies of his works which correct long-standing errors, and have been prepared with the assistance of Dmitri Nabokov, the novelist’s son.

Brian Boyd is a Distinguished Professor in the Department of English at the University of Auckland, New Zealand, and is the author of Nabokov’s Pale Fire: The Magic of Artistic Discovery.
Loading...
or support indie stores by buying on