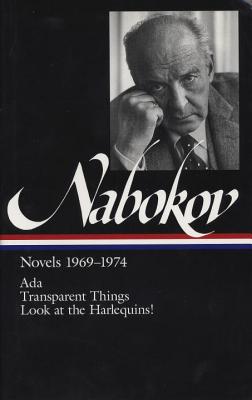 This Library of America volume is the third of three devoted to Vladimir Nabokov, and contains the evanescent works of his later years.

Ada, or Ardor: A Family Chronicle (1969), the longest of Nabokov’s novels, is a witty and parodic account of a man’s lifelong love for his sister. All of his favorite themes and most characteristic techniques are woven into this culminating work of Nabokov’s imagination. The linguistic richness of the book’s free blending of English, Russian, and French is matched by the baroque and dreamlike splendor of the alternate universe it creates, a universe in which time moves in more than one direction and all details are cunningly interrelated. Alfred Kazin wrote on its original publication: “Ada, coming after Lolita and Pale Fire, makes a trilogy with no contemporary peer.”

Transparent Things (1972) is a haunting novella of the anguished life of Hugh Person, a young American editor and proofreader: his marriage, the murder of his wife, and the lone journey to uncover the truth about the past. With its multiple narrative voices and fusion of dream and memory, it is among the most formally experimental of Nabokov’s works.

Look at the Harlequins! (1974), Nabokov’s final novel, concerns Vadim Vadimovitch N., a novelist very much like Nabokov himself. This ironic, intricate hall of mirrors, startling in its shifts of tone and off-key echoes of Nabokov’s earlier books, often blurs the line between the worlds of reality and of literary invention.

Nabokov’s penciled corrections in his own copies of his works are incorporated into these, the most authoritative versions available, and have been prepared with the assistance of Dmitri Nabokov, the novelist’s son.

“There are two ways to read Nabokov (both of them requiring the heeding of his own rule: anything worth reading is worth reading twice). It is quite possible to enjoy his clever plots and his masterly wordplay in English without knowing a single one of his esoteric or abstruse allusions; and it is possible to be infinitely rewarded by knowing, or taking the trouble to find out, just what he means…and means…and means.” —Arkansas Democrat Gazette

Brian Boyd is a Distinguished Professor in the Department of English at the University of Auckland, New Zealand, and is the author of Nabokov’s Pale Fire: The Magic of Artistic Discovery.
Loading...
or
Not Currently Available for Direct Purchase