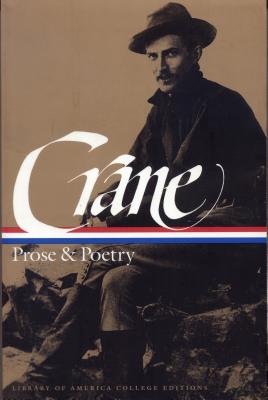 Prose & Poetry (LOA #18): Maggie: A Girl of the Streets / The Red Badge of Courage / Stories, Sketches, Journalism / The Black Riders & War Is Kind

Here in one volume are all of Stephen Crane's best-known works, including the novels The Red Badge of Courage, about a young and confused Union soldier under fire for the first time; Maggie: A Girl of the Streets, a vivid portrait of slum life and a young girl's fall; George's Mother, about New York's Bowery and its effect on a young workingman; The Third Violet, about a bohemian artist's country romance; and The Monster, a novella about sacrifice and rescue. The stories collected here include masterpieces like "The Open Boat," "The Blue Hotel," and "The Bride Comes to the Yellow Sky," as well as tales of childhood in small-town America. In his journalism, the best of which is presented here, Crane covered the Spanish-American and Grego-Turkish wars, traveled through Mexico and the West, and reported on the seamier sides of New York City life. The volume concludes with The Black Riders and War Is Kind, collections of epigrammatic free verse that look back to Emily Dickinson and forward to Imagism.

Though he died at 28, Stephen Crane (1871–1900) was one of the most innovative and accomplished writers of his generation.
Loading...
or
Not Currently Available for Direct Purchase