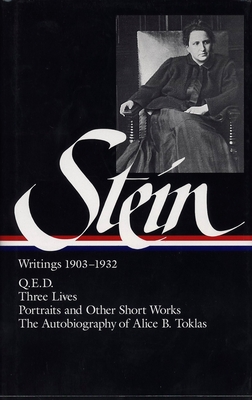 This Library of America volume, along with its companion, surveys a literary trajectory that from the beginning of the 20th century to the end of World War II marked Gertrude Stein as a fearless and uncompromising experimenter. She was also a master of anecdote and aphorism, many of whose phrases—from “rose is a rose is a rose” to “there is no there there” and “when this you see remember me”—have passed into the language.

This first volume, containing works written between 1903 and 1932, takes Stein from her first, more traditional fictional works to the exuberant and astonishing experiments of the early Paris years. She was a devoted student of William James, with whom she studied psychology at Radcliffe in the 1890s, and took an early interest in memory and the function of repetition in human character. In her early works, she sought a new kind of realism exemplified here by Q.E.D. (written 1903, published posthumously), a novel about lesbian entanglements at college, and the modern classic Three Lives (1909), a set of novellas about the lives of three ordinary women, described in the simplest and most direct of prose.

In her brilliant abstract “portraits” Stein uses an extraordinary array of verbal techniques to evoke those friends and collaborators—Matisse, Picasso, Apollinaire, Juan Gris, Satie, Mabel Dodge, Carl Van Vechten, Sherwood Anderson, Virgil Thomson—with whom she shared decades of revolutionary ferment in the arts. Her play Four Saints in Three Acts (1927), which became the basis for an opera by Virgil Thomson, is written for a freewheeling theater of the mind where everything becomes possible. In “Lifting Belly” and other works she joyously celebrates her lifelong relationship with Alice B. Toklas, one of the most famous domestic partnerships of that century. The Autobiography of Alice B. Toklas (1933), Stein’s oblique and playful memoir, became an immediate bestseller and sealed Stein’s international celebrity.

“Few have left their mark on this century’s literature as has Gertrude Stein. More than just influencing prose and poetry as one of our premier innovators of language, she is, you could say, one of the figures who invented 20th-century writing.” —Library Journal