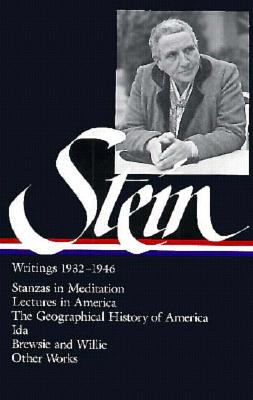 This Library of America volume, along with its companion, presents a full-scale gathering of the achievement of Gertrude Stein, the most radical innovator in twentieth-century literature.

This second volume includes works written between 1932 and her death in 1946, years in which she gained a wider readership and made a triumphant return to the United States as a lecturer, but chose ultimately to remain in France during World War II. It opens with the poetic sequence Stanzas in Meditation (complete text published posthumously in 1946), perhaps Stein’s most austere and rigorous experiment in linguistic abstraction. In Lectures in America (1935) and The Geographical History of America (1936), she made the most of her newfound status as a public figure, exploring with brilliance and humor the philosophical implications of her writings, the difference between English and American literature, the importance of space in American culture, and much else. Picasso (1938) is a book-length study of the painter who was one of her closest associates, and whose work was a lifelong inspiration for her.

Stein’s playfulness is given full scope in the children’s book The World is Round (1939) and in Ida (1941), an enchanting exercise in pure verbal invention. The plays Doctor Faustus Lights the Lights (written 1938, published 1949) and The Mother of Us All (1947), inspired by the life of women’s rights activist Susan B. Anthony, give new twists to legendary and historical figures, while “Three Sisters Who Are Not Sisters” (1946) pays tribute to the melodramas that delighted Stein in her childhood. In her last major work, Brewsie and Willie (1946), a striking stylistic departure, she pays homage to the American soldiers she came to know after the liberation of France with a remarkable evocation of their speech and aspirations.

“The richness of this volume alone justifies Stein’s recognition, at last, as a ‘classic’ of American literature.” —The Boston Globe